I’ve got a few packages in the mail over the last few days, as well as a pack of cards or two. The cards came by way of 2 Targets that my wife graciously let me hit up while we were in Georgia and on the way home. The one in Georgia was located in Alpharetta, which is a really cool little town (at least most of the parts we went by). It had 1 hanging box of '21 Heritage left, and I got it. The Target we drove past was in Daytona, and it only had packs of '21 Opening Day, so we were able to get 3 packs. I would've probably got a few more if not for the 3 per rule, but at least there is something there for the collectors to purchase. 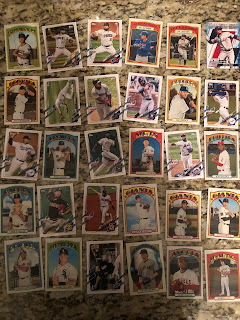 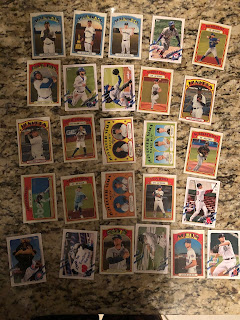 No Sp's in Heritage, but I did pull some (meh) rookies, and I got 2 mascots from the Opening Day. Unfortunately, for me, the Cubs mascot was the 3rd one of that card that I have, as I purchased 2 before we went to the Cubs game in hopes of getting one signed for me and Kyler. I guess one will go in my Cubs binder, one will go in the area of my shiny binder that is dedicated to mascots that I hope to pass on to Kyler when he gets a little older, and the last one I might just add a second one to the mascot section or if anyone wants it, add as part of a trade package. The Heritage Meadows is a dupe, but the Opening Day one is new. I also have the "In Action" version of deGrom in the years' Heritage, and the Casey Mize Opening Day card will go nicely in his section of my favorite player binder right next to his '21 Donruss, Topps, and Heritage cards that I pulled.
As for the pacakges I was talking about, both came within a day of each other, one a package from Bob of The Best Bubble, and the other from Night Owl Cards.
I had reached out to Bob about sending him some bubble blowing and car in the background cards. We had traded about 2 years back (oddly enough, both times were shortly after coming back from vacations). He sent me some nice 30+ year old cardboard featuring Tigers. The McLain is the first actual non-reprint playing days McLain card that I own, and as excited as I am to get cards from the '70's since I only have maybe 1 Tiger card from any set from 1951-1979 or so, I was really excited for all of the 1985 Topps cards. I always enjoy cards being "yearbook style", where the players are pictured with their teams that correspond to the stats on the back (aka, the year before the card was issued). Since the Tigers won the World Series in '84, I consider the 1985 Topps set to be the best set to collect to honor the 1984 championship team. It's nice to get a little closer to completing that set. If only I could get a few (dozen) more to complete the 1969 set honoring the '68 team. I think so far I just have Norm Cash, Darryl Patterson, and Mayo Smith. 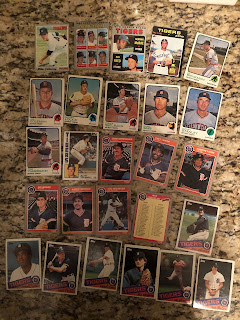 Night Owl sent me a few cards each of the Rays and Tigers, and one of noted failed Dodger prospect/favorite player Billy Ashley. I always figured Ashley would hit 40 HRs in the Majors, and to be fair, he never really did get the 200+ At-Bats in a season to adjust to the majors. The Smyly card is a rainbow. I've always admired how nice Jeff Niemann was to fans during his career, almost always signing autographs when he had a chance. I'm sure he would've signed his '08 Allen/Ginter mini had I had it around that time. I swear I am close to completing the Tigers (and Rays) from the 2015 Heritage set, but even with the new Gose card, I'm still close to 10 short. I think because of SPs and the High Numbers. 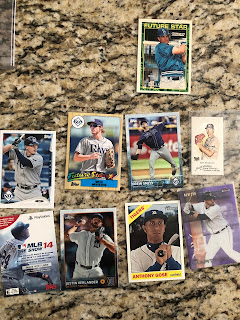 Thanks, Bob and Greg, for the great cards.
I think we are supposed to be getting rain the next few days, which I welcome. Late last summer, my coworker, Butch, gave me a plant that I still don't know the correct name of. It looked about the same as the big leafed plant in the picture below. Well, winter came, and it ended up drying out and dying off. I cut off the dead branches, and a few weeks ago, when we got a day or so of rain, started to notice some little shoots coming out of the area where the original plant had been. Sure enough, it looks like this today, and good news is that it has already rained a little today, so hopefully they will start flowering at some point as long as the rain keeps up this summer. I added another pineapple (at the very bottom right corner) which needs the rain pretty bad, and there have been a few gladiolus coming up as well. All of those died off last year, so between that and the on Butch got me, I have some decent plants that come back every spring. 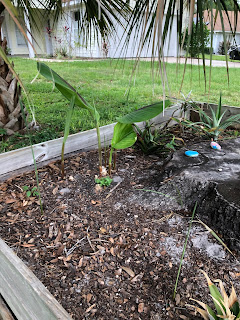 Out in the back, the same 3 pineapples are there, perhaps one that will bloom this year. I think on the right are some sunflowers, and the yellower of the two must be something my sister got me that I planted. I also planted some pea and bean plants that she got me, I don’t think I’ll know where they are unless some of the fruit? starts blooming. Just like in the front, the gladiolus are popping back up, and in the very middle is an orchid that Butch gave me some seeds for. I had success with one in the front, and when he told me how big they get, I decided to transplant it to the back. It didn’t survive, and I was afraid all hope was lost as I had planted most of the seeds he gave me with no luck. I planted the last seed and waited to do so before a rainy day. I didn’t get anything for almost a month, and I checked back about a week ago after we got some rain finally, and sure enough, it stuck it’s head out of the ground. I had the boxes looking nice about 2 months ago, but the weeds are starting to show up again. 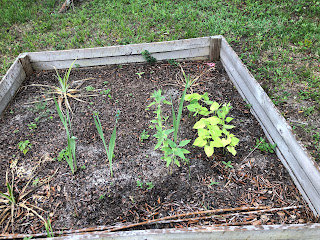 That’s about it. Thanks for checking out my latest post.
-Jeremy
Posted by Jeremya1um at 3:28 PM