How do you store you cards with multiple players?

I'm working on a big project of inputting all of my Topps cards into TCDB so I can get wantlists for each set, as I attempt to get every Topps/Topps Traded base card from 1951 to the present. This has presented some unforseen extra tasks for me to accomplish along the way.
I purchased a number of Topps complete sets from the '90's to help me out with that decade, and I have come across a number of multi-player cards while sorting them. Many of them are duplicates. This isn't a problem, as I can put them with the team of a different player. The trouble is, many times, I don't exactly remember which team I put the original card with. Here’s an example. 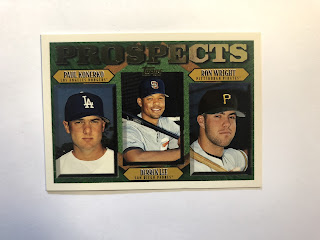 I have at least 1 copy of the 1997 Topps Derrek Lee/Paul Konerko/Ron Wright card. I thought I may have stored the card with the Padres and showcased Derrek Lee on the card. While inputting the Dodgers Topps cards into TCDB, I found the card with the Dodgers, highlighting Konerko. There are many other multi-player cards where I just can't remember which team they are stored with, so that led me to the idea of just pulling out every multi-player cards with more than 1 team represented as I put all of my Topps cards into TCDB, and then seeing which cards I have doubles of, and finally putting each card with the player/team I want it with, and then putting all of my loose cards into my binders. Sounds like a pain, but I think in the end, it will be worth it.
That led me to wonder how my readers store their multi-player/multi-team cards. I have a few ways I figure it out for my collection. 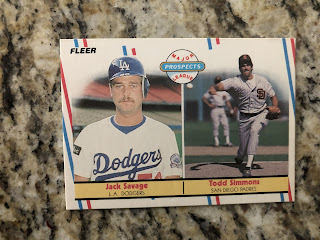 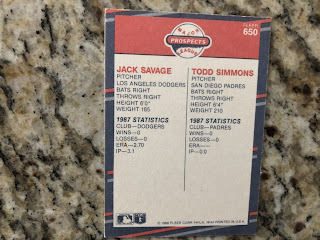 For a card like this one, it's just 2 guys who never amounted to anything. They didn't hurt any of my favorite teams, and I have nothing against them. I tend to look at the back, and whichever player did the most in the Majors, they get the card. For this one, Savage wins by 3.1 Innings. 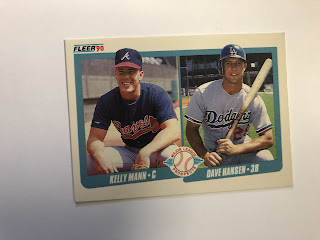 Next up, it's probably the easiest card to store. Mann never amounted to much, and Hansen set some pinch-hitting records. It goes to Hansen and the Dodgers. 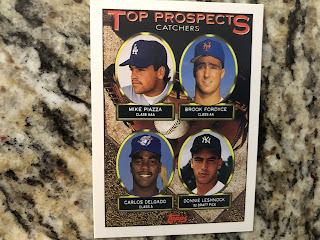 This one if you really split hairs, you could make a case for Delgado, but for me, it easily goes with Piazza. If I happened to get a double (which I have), I would put it with Delgado, then Fordyce if I had a triple, and finally with Leshnock if I happened to have 4 of this card. If I have 5, into the doubles box to maybe trade. 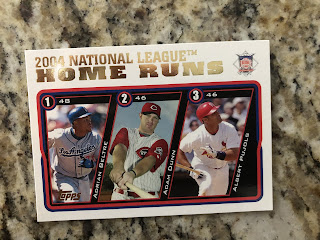 League Leader cards are somewhat easy. I generally put them with the player who led the league in whatever stat. This one goes to Beltre and the Dodgers, although I would be tempted to put it with the Cardinals and Pujols just because he was such a great player. Many times with if I have a multi-player card with Ken Griffey, Jr., it automatically goes to Griffey. 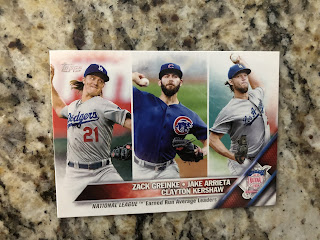 This card, although you might think it would go to Greinke, it would not. Greinke has always came off as a jerk to me, acting all moody with fans and refusing to autograph a card for Pat Neshek. I would avoid putting it with Grienke at all costs, and it would go to Kershaw (cause he's a great guy), and then Arrieta if I got doubles. I also avoid putting cards in my Yankee$ binder at all costs as well. A number of recent Gerrit Cole league leader cards are stored with the other players on it. Also, guys I just don't care for (Jeter, Yadier Molina, Fernando Tatis, Jr., Manny Machado, Justin Turner, Pete Rose, etc.) usually don't get any of their cards unless it's a last resort.
How do you do it? Do you just put them with the first guy on the card? Do you put them in a special binder? Do you just throw them out and line your birdcage with them? 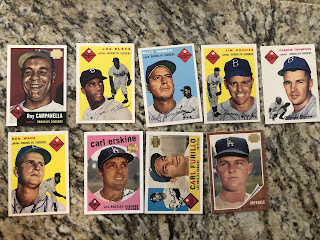 I have also been picking out reprint cards with the original backs on them to use in place of older, more expensive cards. I've found a handfull in my Dodgers binder, and hopefully can get a good pile of them in order to save money on older cards.
For anyone who wants to make trades, be patient. I will have all of these cards uploaded towards the last half of the year, and then it will be time to get crankin. I have a feeling I will be able to find cards for sets a lot easier once everything is logged into TCDB. That was a big problem for me previously. If someone wanted to see all of my 1995 Score cards, I could go through my 30 team binders and take a few hours, but if I have them all logged into the database, it will take minutes. I'll still have to pull them from the binders, but at least I will know which ones to look in. For anyone wanting to add me on TCDB, here is my profile. I am still learning on the site, but it is getting easier, so thanks to everyone who has helped me and given me advice.
I'm off to put in the Brewers in TCDB. Thanks for checking out my latest post.
-Jeremy
Posted by Jeremya1um at 11:07 AM