A lot on the plate 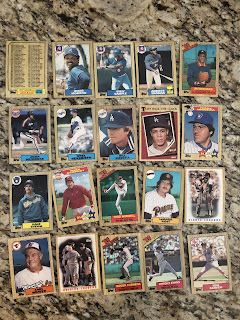 I am still missing a few, and I'll add a list to the bottom of this post in case anyone has '87 Topps cards they can spare. Greg also must've taken a look at my want list, as he added not only a 1998 Topps Chrome Refractor Tony Saunders card, but a 1978 Topps Lance Parrish/Dale Murphy rookie. 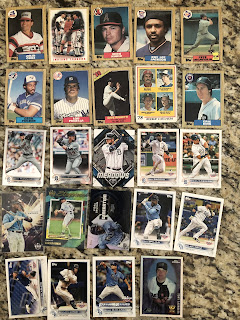 The Saunders card was cool because it only leaves me with just his '98 Topps Inaugural Diamondbacks card from having his base/Minted in Cooperstown/Inaugural Diamondbacks/Inaugural Rays/Chrome/Refractor 1998 Topps rainbow. The 1978 Parrish card is probably my favorite one of the bunch. Not only is it a great rookie card of 2 borderline Hall of Famers, but it is an original card from Greg's collection when he was a kid. I feel honored to have a card that Night Owl had when he was a kid growing up, and to me, a card like that is better than a gem mint 10 superfractor chrome dazzle sparkle prizm card of the next up and coming rookie. In addition to those cards and the 1987 cards, were some Rays and Tigers from this year, most of which I need. I haven't decided if I'm going to try to go after all of the Wander Franco rookie cards, but thanks to Greg, I now have the Diamond Kings one. Thanks, Night Owl, for the cool cards!
I also ordered some Topps Traded sets from eBay. I (basically) have complete Topps sets from 1986-1994 or so, but not the Traded sets. I'm kind of want to finish up some of my Tigers master Topps sets, as well as regular master Topps sets in general. The Traded sets I ordered will give me every Topps Traded set from 1986-1994. I also ordered the 1 card I needed to at least give me the 1995 Tigers Traded set as well. Some of the newer Traded sets like 2002 and 2003 might be a long time coming as they have SP veteran cards, but at least I have some earlier ones and the 2019- present ones. I would love to get the MLB debut sets from 1989-1991 (or 1990-1992 if you go by the design), but with Griffey rookies and such, the flipper brah's made these cost more that what I think they are worth (especially the 1992 set). With just Bagwell, Pudge Rodriguez, and Thome in that set, I don't get why it's so expensive. Heck, I got the Bagwell from a dollar box 15 years ago. I might see if I can get some sets with just the Tigers. At any rate, this will put my organizing back to square one, but at least I'll have some full sets to look at while I'm organizing them again.
That's about it for me. If you would like to send me some of your 1987 Topps cards, my needs are as follows:
6 Ruben Sierra Record Breaker Rangers
170 Bo Jackson Royals
261 Ruben Sierra Rangers
319 Greg Swindell Indians
323 Al Newman Expos
369 Brian Dayett Cubs
527 Jim Wohlford Expos
565 Dusty Baker Athletics
568 Ben Oglive Brewers
581 Cubs Leaders
690 Dane Iorg Padres
761 Greg Pryor Royals
788 Tim Stoddard Yankees
Thanks for your generosity, and I'll find something to send back.
Thanks for checking out my latest post.
-Jeremy
Posted by Jeremya1um at 1:57 PM