I have been a bad blogger this past month. Feels like I haven’t posted in like 3 weeks when I usually get at least 1 per, but things have kind of changed here a little bit. I have been trying to put all of my loose cards into team binders, and today finished the NL. I was planning on kind of going at an easy pace, but got some news a few weeks ago that made me want to speed up the pace to try to get them all done in the next few months. If everything goes the way we hope, I'm definitely not going to have much free time to work on organizing cards or doing customs for the forseeable future, but it will definitely be worth it. I should know more news on Tuesday. I'll probably post about it if it is good news, if not, things will just go back to normal, and we will just hope for better next time.
Since the last time I've blogged, I got a package from Kerry of Cards on Cards, who recently posted about some cards I sent him in a swap.
He recently had a Super Bowl contest, and I placed, and Kerry sent me the entire 2015 Topps Sticker Collection Rays set, and threw in a 2020 Topps Update Miguel Cabrera. I'm hoping that when the ballparks allow fans again that I can get the Raymond sticker signed. I have about 10 different Raymond cards/stickers, and one of these days I'll get them signed. 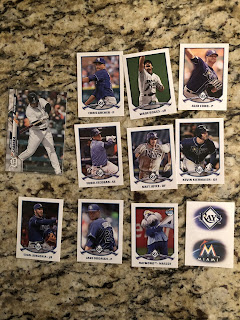 I also ended up going to my LCS yesterday. I was able to get a COVID vaccine at my wife's work, and they were scheduled to come back for the 2nd dose yesterday, but we didn't know when. I had to work, so I rushed as much as I could (which is hard to do where you have bread/rolls/cookies/pastries/pies that only bake correctly at certain times/temperatures and you have a computer that tells you how much of each thing to produce and also doesn't know that you are in a hurry). I didn't take a lunch, which helped. The vaccine people hadn't come by the time I got home, so I quickly changed clothes, straightened the house a bit, and drove to the card shop since they let me know they got a box of 2021 Topps in. I thumbed through about 1 1/2  .50 cent boxes when my wife let me know they finally came, so I paid for my purchases, drove to her work, and got dose #2. So far, after a day, no symptoms really. The injection site hurt, but not nearly as much as the first dose, and I have no headache/nausea/tiredness. Heck, I even mowed the lawn today.
As for the cards, I just picked up 2 packs of 2021 Topps (at 7.50 each. Ouch!), 3 3 for 5 dollar cards, and some from the .50 cent box. 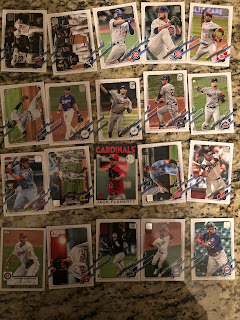 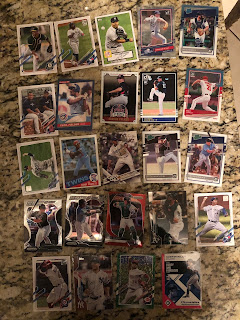 The 2021 Topps are (mostly) first. The 3 for 5 buck cards were mainly chosen because of the 1985 Topps Kirby Puckett rookie. I would've probably paid 5 bucks for the Puckett rookie itself. There wasn't much to choose from in that box (it was mostly football), so I found the Brendan McKay parallel, and the '86 Donruss Cecil Fielder rookie. The notable 2021 Topps pulls were a Ryan Yarbrough card for my Favorite Player binder, a Nate Pearson rookie, a Howie Kendrick sunset card, and a Rasiel Iglesias parallel (camo, I think). I believe the card is numbered to 400, but I have it in my 'cards to be put in binders box', so I don't have it handy. It's a little disappointing that Topps is apparently doubling the production of their set. It's still tough to find boxes at retail chains, the parallels are tougher to pull, and all it is going to do is drive the prices of any rookie cards down because they will be (in theory) twice as easy to pull. If Topps decides to double the printing of other sets, it will do the same thing. It's not like I'm a huge rookie collector, but I do want my cards to retain some value in case I or my loved ones ever have to sell them. What will stink is if they just ramp up the production of all of these mainly retail-only sets but still short print the higher-end sets. They will make money in the short term, but it will bring the value of the Update rookies down, as well as Bowman cards. Do you think if this had happened in 2011 instead of 2021 that the Trout rookie would be worth half of what it is now?  If I'm not going to be able to find 2021 Topps in the wild, I'm not going to pay 6-8 bucks at a hobby store more than once or twice, and I'm just going to have to kiss getting any inserts or parallels goodbye, and just purchase the set at the end of the year so I can have it, and any rookies are going to be devalued. Thanks, flippers.
As for what I pulled from the .50 cent box, I think I did well. I mainly got some of the big name prospects and some numbered cards. The Gore, Kellenic, Bart, and Rodriguez cards are my first of them. I think Murphy has some potential to be good, and I found 2 rookies of him, I believe the Optic is numbered. I can't stand the Yankees, but the Stanton was numbered to 50, so for 2 quarters, I couldn't pass it up. Anyone want it?  Even though the Austin Riley card doesn't look much different than what I figure a base card would look like, it is numbered 2 out of 25. It will be headed up to Valdosta for John at some point.
The plan for me is to finish putting new cards in the rest of my team binders. I am pulling cards for certain bloggers, and when all of the team binders are finished, I'll probably send out a slew of packages. I'll then do my Rays and Tigers binders (which will hopefully have a ton of new cards to add to them), then my Favorite Players, Highlights, Rookie cards, sunset cards, and finally my shiny/numbered/refractor/game used binder. Hoping to get it all done by September. I'm going to try to limit my card purchases to nothing before 2015 or so, just so it makes it easier to put cards into binders (I organize them by years, so I won't have to go too far back when adding new cards). For Rays/Tigers/Favorite Players and the highlights/rookie/sunset/shiny/#d/refractor/game-used ones, I'll not follow the rule, but for the teams I don't collect, I don't want to have to constantly be updating 3 binders each per team just to put in 1 1989 Score card that I somehow didn't have.
I haven't really done much with customs either, just due to wanting to get these binders finished, and I kind of doubt I'll really get much done the rest of this year, and I'm ok with that. While I was wanting to get the '98 set finished, as well as 1 or 2 more, I don't think that I'll even be able to get the '98 set finished. I'm still ok with that. If I get these binders organized, I might work on customs, or I might try organizing my doubles into teams or pulling some Orlando Magic/Detroit Pistons/Tampa Bay Bucs from my basketball/football cards. It will just depend on what I feel like.
Hopefully we'll get some good news on Tuesday. It will be so worth all of the frustration that's happened in the last 4 or so years.
Thanks for checking out my latest post.
-Jeremy
Posted by Jeremya1um at 3:51 PM