I figured with all of the crap that 2020 has thrown at us so far, that a Yankee$ World Series title was all but a given. My Rays hung in there with them throughout the whole season, and ended up with the best record in the AL. I was happy that they got to the playoffs, but the Yankees just looked so friggin strong, that I was hoping somebody else would somehow take them out before Tampa had to play them. Well, after beating the Blue Jays, the Rays made it to the ALDS, and of course, the Yankees beat the Indians, and they ended up having to face each other. After dropping the first game, Tampa ended up winning the next 2, then dropping Game 4, forcing a deciding Game 5. Somehow, the Rays got an Austin Meadows HR off of Yankee Ace Gerrit Cole, and only allowed an Aaron Judge Home Run through 7 1/2 innings. Mike Brosseau stepped up to the plate against Aroldis Chapman, and slugged a HR to give the Rays the lead, and then Diego Castillo closed out the game, sending the Yankees home, and the Rays to the ALCS against the Houston Astros.

Every time the Yankees get eliminated from the playoffs or playoff contention, I like to celebrate the next day and call it "Yankee Elimination Day". I also do the same thing with the Alabama Criminal Crimson Tide. This year, it happened 10 days earlier than last year, and the earlier it happens for me, the better.

Every year for Yankee Elimination Day, I make some customs for the next years' Topps set celebrating the Yankees elimination. Here are 2 for this year on the 2021 Topps design. 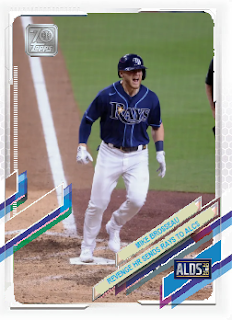 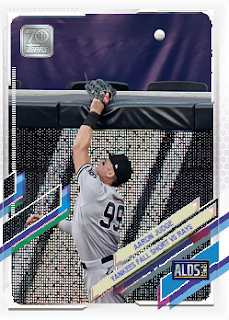 Hopefully, Topps at least makes a card from one of the 2020 ALDS games in the flagship or Heritage set.
I really like the players on the 2020 Rays team. I think they have a good shot against the Astros, especially since the Astros are short Verlander, Gerrit Cole is gone, and Greinke might be hurt. If the Rays can just score a few runs and hold the big boppers like Altuve, Correia, and Springer, we might be looking at the Rays 2nd World Series berth. I would be so excited. If Tampa gets to a World Series or wins one, it might just get MLB to notice them and they will be forced to put out a few more cards of them in 2021. PLEASE TOPPS & PANINI!!!!

I have a feeling that if they make it to the World Series, they would have a better chance against the Braves, since the Braves don't have too many big boppers (just Acuna, Freeman, Ozuna, and Riley), and their pitching staff has had injuries. If it were the Dodgers, I would hope they could hold their own, but going up against Kershaw, Buehler, Urias, and bats like Pederson, Seager, Bellinger, Betts, etc, it might be too much, and I would be happy for Night Owl, I really would, but I just would be crushed that they got so close and still haven't won a World Series title.