A few days ago, Topps released the images of what the 2020 Topps design is going to look like. A week or so earlier than last year, but I guess since I make customs, I'm ok with that. I think Night Owl hit it on the head when he said it was the same as 2016 Bowman. Here they are side by side. 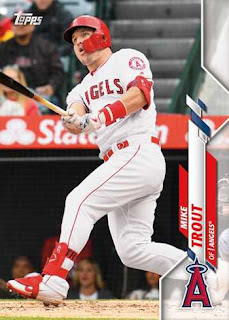 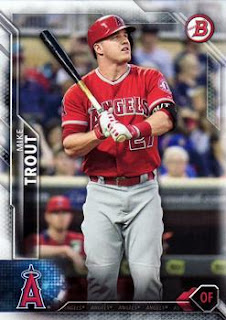 Basically a mirror image. I also think there is a little bit of 2003 Flair Greats of the Game in it with the bottom logo part and the kind of curvyness of the name and stuff coming out of the side of the card. 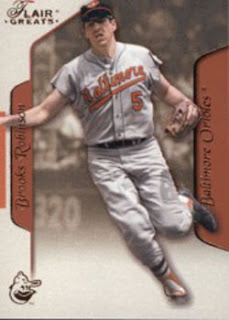 But yeah, Night Owl was right on the dot when he said it was 2016 Bowman Series 2. Remember when Bowman had 2 series? I'll admit that 1998 Bowman and 1999 Bowman were very similar, but back around that time, when Bowman had 2 different series, it was nice, and the sets were distinguishable. I miss the '90's.

I decided to do some custom work with the 2020 design. Here is what I came up with. First is a custom of Rob Manfred. I usually try to do a custom of the Commish when the new Topps images come out. Part of it is because I like to see how close to the top my image can come in a '2020 Topps' image search on Google. The other part is because Topps doesn't do a card of the Commissioner, so there is no chance of it being made in Series 1 or 2 or Update. 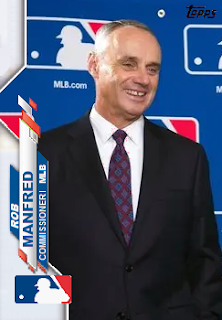 I also did a mock-up of the back. I am not sure what they are going to do with the backs. They may go with the name on the sides, but I think it's going to be a real conundrum. They usually incorporate the front of the card with the back, but I don't see how they can implement the card number and bio on the top of the card back if they have the name and stuff on the top. They could add the height/weight and stuff on the bottom, but normally the legal stuff goes there. Here is my take on what it could look like. 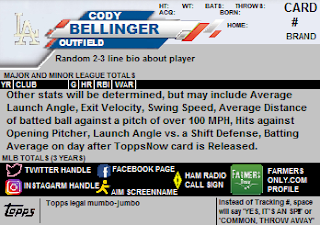 It's a little hard to read because I wanted to put a lot on the card, but it basically has a spot for a Twitter Handle, Instagram Handle, Facebook Page, AIM Screenname, Ham Radio Call Sign, and their FarmersOnly.com Profile. Basically, everything you need. Of course, you will have the usual sabermetric stats, a limited number of years on the card (4-5). On the bottom right, instead of a tracking number, it will either say "YES! YOU GOT AN $P!!!!" or "COMMON, THROW IT AWAY!".
With the crap that Topps has been throwing us the last few years, I think we should have a contest, and have any custom card maker who wants to be a part of it. They can design a front and back, and collectors can vote for the best one. Whichever one wins will be the official new flagship set of the year. Cards will be published of every player, and then they will be produced, and anyone who wants better cards than Topps can order cards of each player, team sets, or complete sets. Basically our way to make a better base set than Topps, and sold in a ToppsNow kind of way. If anyone feels like doing this, comment. I can get the word out to custom guys I know, and I'm sure we could probably get at least 6-10 original designs. I have 1 or 2 I could dust off, including a set with base, coach/manager, 3-player prospects, highlights, and team photo designs. Anyways, if voting on a custom set seems like something a good number of bloggers would like to do, send me a comment, and I will get the word out and make a post with some designs that have been submitted.
Lots is going on in my life, but I hope to get back in a routine and post a little more. I'll do one about the new card shop in my town sometime.
Thanks for checking out my latest post.
-Jeremy
Posted by Jeremya1um at 1:18 PM