Trade with The Collective Mind

Another person to kindly react to my trading post and want to start a trade was Greg from The Collective Mind. He commented that he had some cards from my Want List, and soon, we got a trade in the works. I was able to find some cards of a few guys he collects, and I will definitely be looking out for more the next time I am at a card shop or a show. I haven't been to many of each this year, but fingers crossed, 2020 will hopefully be better for my family and I.

Yesterday night, I recieved a box from Greg, featuring a ton of Detroit Tigers, Tampa Bay (Devil) Rays, and some guys I collect. The pictures here don't do it justice. It was a good 6-8 inch stack of cards, and I think I needed every one. Here are some of the cards that were highlights for me.

The first 2 are of Bobby Higginson. He was one of the better Tigers in the late '90's. I was lucky enough to meet him and get his autograph many times during Spring Training. If I would've had his '97 EXL and '97 Finest card, you can bet they would be signed by now. The next 2 are from 1998 Topps Chrome. I busted packs whenever I had money in 1998, but I just never made it out to our LCS back then, so it was mostly retail Topps, Upper Deck, and Collector's Choice. I was jealous of friends who had cards from '98 Topps Chrome, but now, 20 or so years later, I have a sweet Robert Fick Prospects and Higginson card of my own from the set. Next up is a card of Brandon Timm from '04 SP Prospects. I busted at least 10 packs of the set and never pulled the Timm card. I had totally forgot his name until I saw this card yesterday. He played for the Lakeland Tigers around that time, and I saw him play at least a few times in person, and could've probably got this card signed if I had had it back then.
I did get the '04 Topps Alan Trammell signed when he was a manager, but it, along with many Tigers cards I had, got sold when I sold some of my autographed cards around 2013. Next up is an Upper Deck Timeless Teams? card of Jim Northrup. I remember reading about Jim and how he was a big part of the '68 Tigers team, but never saw many of his cards. It is nice to see him show up in a retro set and to be able to add his cards to my collection. Next up is Chris Shelton's '05 Topps Cracker Jack card. Chris was a beast, and hit like 12 Homers in 20 games or something like that in '06, and I wish he would've got a better shot in the Majors. Always nice to get cards of Big Red. The next 2 are a sweet parallel from '05 Donruss Elite of Troy Percival, and a card of Carlos Guillen from a set I have never heard of ('05 Skybox Autographics). To the bottom left is an acetate (never know how that word is pronounced) card of Pudge Rodriguez from '05 Studio. 4 of the next 5 cards are from sets I have never seen until today. The '06 Topps Chrome Refractor of Bonderman was the only set I have seen, and the other 4 are from random higher-end Upper Deck sets, which is probably why I have never got any base cards from them. Its great to add some new sets to my Tigers binder. 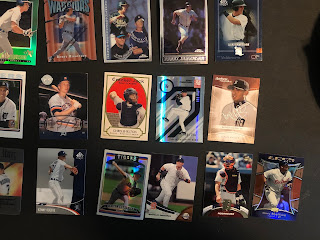 On to the Rays part of the package, I got a '98 Topps Chrome John Flaherty that brought back some old memories. I was at a Rays game in '98 or '99, and was getting autographs before the game, and a lady and her son came up next to me, and had some nicer cards from sets like '98 Topps Gallery, '98 Topps Chrome, and such. I basically had Topps, Upper Deck, and Collector's Choice, and I remarked to them how they had some nice looking cards, and went about the rest of batting practice getting autographs. I will alwasy remember how nice their cards were. I guess they had went to a card shop at some point and got them. One of them was the '98 Topps Chrome Flaherty, which is now in my collection, thanks to Greg. The '99 Topps Bobby Smith is just a base card to 99% of collectors, but I barely purcahsed any '99 Topps, and this set is a great set for Rays fans like me, because it shows the teams first year. Next up are 2 2000 Jose Canseco cards, a nice Pacific Gold Crown die-cut, and a 2000 Topps card. I always wished he and the guy on the next card would've produced like they did in the previous 5 years. The Rays would've scored many more runs if Canseco, Vinny Castilla, and Greg Vaughn hit 40+ Homers during their tenure. The Castilla card is an insert from 2000 Upper Deck, and is pretty shiny. The Next 2 cards are from sets Topps put out in 2001. The Ben Grieve is a parallel from '01 Gold Label, and the other is a base card of Fred McGriff from '01 Topps Reserve, a set which only lasted 1 year. The big thing with Reserve is that you could pull redemption cards that featured a graded Topps Reserve card, with either a cut autograph (and I may be mis-remembering the next parts), a jersey piece, or a signed helmet. The '90's and '00's were a strange time with cards.
Next 2 are 2 shiny parallels from sets that I have purchased cards from, but never pulled parallels from. The first is an '05 Leaf Certified Materials card of Rocco Baldelli. I purchased a pack or two of the set, but never pulled anything that shiny. The 2nd is a Playoff Absolute Memorabilia parallel of Carl Crawford. I purchased between 5-10 packs of that set (perhaps maybe even a retail box), and I think the only parallels I pulled were a red and black logo card. Greg helped me add to my Francisco Leandro collection again. I went from having 0 card of Leandro to having 3 in the past month or so.
The 2 on the bottom left are from the '07 Topps Co-Signers set, and the last one is a neat looking (base?) card from a set I had never known about, called '07 Upper Deck Elements. It is cool to get such neat looking cards and to add depth to my collection with new sets. 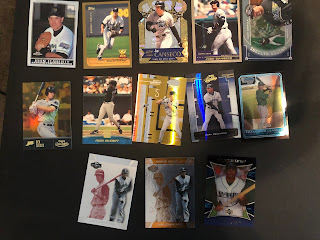 On to the Favorite Player portion. Up first is a sweet '03 Bowman Chrome Refractor rookie card of Matt Diaz. I wanted to pull his card so bad in '03 and get them signed, so I am happy to have a nice collection of him now. Next to him is an '05 Donruss Champions parallel of Joey Gathright. I got a boost to my new Aubrey Huff collection, with 6 different cards, including 4 parallels. I don't know where you get all these sweet parallels, Greg, but you outdid yourself with them. My Brandon Inge collection got 3 new cards, including a nice Red framed parallel from '05 Donruss Diamond Kings. The next few are some inaugural Rays whom I collect, Brooks Kieschnick, Quinton McCracken, Tony Saunders, and Bubba Trammell. I love the Topps Chrome cards. 2 new Ben Zobrist cards to add to his part of the binder, and finally, a nice sunset card of Brook Jacoby that Greg had and was nice enough to send me. 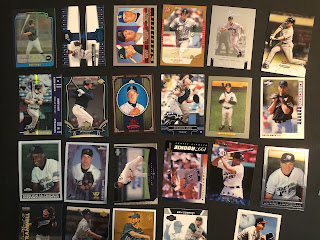 Thanks so much, Greg, for trading with me. You outdid yourself with the package. I will keep my eye out for Royce Clayton, Mike Mussina, Livan Hernandez cards, and anything else I think you will like.

Things are a little crazy in the next week or two. My family and I are going to be in 2 parades in the next 2 days. We are playing with the band from our church on the float in the DeLand Christmas parade tomorrow. I'm hoping to pitch a few original songs to Joe, our new leader, if we have time tomorrow. I will let everyone know how that goes. My wife will be on the float in the Port Orange Christmas parade on Sunday with her work, and I will tag along with her for that one.
On Tuesday, she is flying to Atlanta for 3 days for her work, and I should have some time to make checklists and customs. I should have a package from COMC in by then, so perhaps, I will be doing some organizing and updating. While putting the new cards from Greg in to my Rays/Tigers box, I didn't add any of them to my Rays and Tigers Want Lists, so I think once the trading/COMC packages die down towards the end of the year, I will put all my new cards in binders and make sure everything is updated.
The week after that is a little up in the air. My wife has been getting the bad headaches again, so she went to her neurosurgeon in Gainesville today, and based on some tests that they did, they don't believe her LP shunt is working, so they want to do exploratory surgery on her on Monday the 16th. I will probably go up there with her. Hopefully this will fix everything, but if you have been reading this blog for any amount of time, you know that this is just a weird thing with her, and that she has had like 10 different surgeries since I've known her and it hasn't really seemed to fix anything for a long period of time. We'll see what happens with this one...
Speaking of how long I've been with my wife, it is our 7-year wedding anniversary on Sunday. Perhaps we will go out to eat after the parade and celebrate. I don't know how she puts up with me sometimes.
I hope to have some packages out sometime this week, so if you've traded with me lately or have emailed me about a trade and sent your address, I just may have something headed your way.
Thanks for checking out my latest post.
-Jeremy