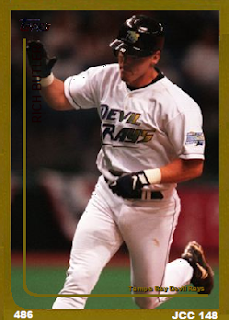 I always thought Butler would make a good outfielder with the Rays, hitting 20 HRs and stealing 20 bases, but he never got much of a chance in the Bigs.

Posted by Jeremya1um at 6:38 PM No comments: 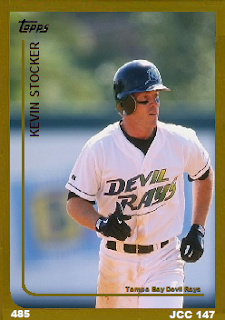 Kevin Stocker played for the Rays in 1998, serving as their starting Shortstop for most of the season. For some reason, he was left off of the 1999 Topps set, I assume just because it was a small set and that the Rays weren't a big market. He did appear in the 1999 Stadium Club set, so what do I know? 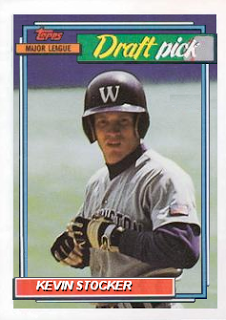 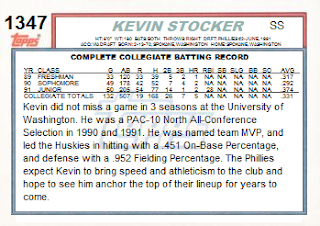 I worked on a few cards in the last week, doing a few highlight, World Series Winners, and sunset cards. Hoping to post a bunch in the coming weeks. Thanks for checking out my latest card.
-Jeremy

Posted by Jeremya1um at 6:53 PM No comments: 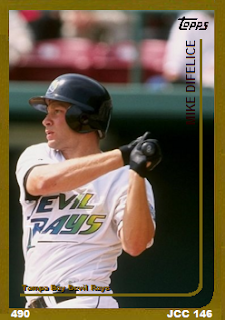 Mike Difelice was a catcher for the 1998 Devil Rays. He came up in 1996 with the Cardinals, and was selected by the Rays in the Expansion Draft in late 1997. He stuck around until 2008, never getting into more that 93 games in a season, but serving as a valuable backup catcher, playing with the Rays, Tigers, Cardinals, D-Backs, Mets, Cubs, and Royals.

His only Topps cards came in the 2001 and 2003 Traded sets. Backup catchers don't get many cards, but being a Rays fan who went to about 5 games a year from 1998-2011 or so, I really wish Topps would've made team sets back in the late '90's and early '00's so I could've had a few cards of Defelice to get autographed.

We are in the middle of a 7 card stretch of 1999 Topps Devil Ray cards. I know the guys featured probably aren't household names, but I figured posting each one individually would shed light on their careers and maybe make the posts a bit more interesting. There are some more well-known players to come afterwards, I promise. I'm working on some of those cards as we speak. Thanks for checking out my latest card.
-Jeremy
Posted by Jeremya1um at 6:17 AM No comments: 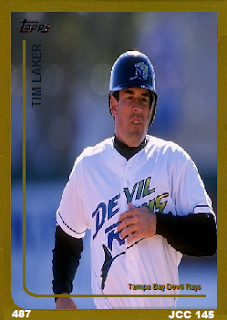 Tim only got 2 cards in Topps sets, 1993 and 1994. After I made this card, I realized that it wouldn't have been possible for Topps to make this card in 1999 since Tim signed with the Pirates in the middle of the '98 season and got into some games with them later in the year. Oh well, as part of my '98 Devil Ray set, I guess everyone who played in a game (even if they got time with another club in 1998) deserves a card, it just will bug me now that this card wouldn't be possible.

As with many of the guys I've been doing customs of, I should probably try to make the rest of their Topps cards, but only time will tell. My wife is 11 weeks pregnant with our first child, so I suppose that in the coming months, I won't be making many customs and my posting will be sporadic, but we shall see.

I've done a good amount of customs (mostly '90's cards, as those were fun years for me as a baseball fan and collector). I think I like the designs of  '90's sets as well too, which could be why I've done a majority of them too. I did do a custom 2016 Bowman card of Brody Koerner, who I'm related to through marriage. I'm hoping to see him pitch next week in Daytona, but just found out he was put on the 7 Day Disabled List on May 5th, so hopefully he will get off it before then. I'm going to try to print out the card and maybe give him a few. Might get a chance to see him play in July, but it would be cool to see him play twice. Thanks for checking out my latest post. 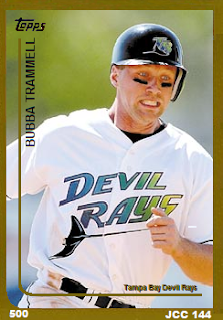 I had a great vacation, and now am back with a post about one of my favorite players. Bubba Trammell played in the Majors from 1997-2003. He received Topps cards in the '97-'98 sets, and the '00-'03 sets. He tore up the Minors and I really think he could've been a 20-30 Home Run guy in the Majors, he just never really got the 500 At-Bats in a season to show what he had early in his career.  By the time he did, personal problems and injuries curtailed what could've been a great career.

Bubba was one of my favorite players from the start of his career. I started following him while living in Lakeland, Florida. He played for the Lakeland Tigers in 1995, and I was 12. I didn't go to any games that year, but read about his power in the local paper. I made it to about 5 Lakeland games in 1996, but he had moved up the ladder by then. In 1997 I got his '97 Topps and '97 Collectors Choice cards out of packs and I looked forward to seeing him bash Homers for my favorite team, the Detroit Tigers. In November of that year, he was selected by my other favorite team, the expansion Tamla Bay Devil Rays. I saw a few Rays games in '98 and '99, and I got Bubba to sign his '97 Collectors Choice card at a game in 1999. I was crushed when the Rays traded him in 2000, but was happy to see him play in the World Series that year. Too bad it was against the Bankee$. He had a few good seasons with the Padres after that, but then the injuries and personal problems came and he was out of the sport by 2007. Bubba still remains one of my favorite players and I have close to 20 of his cards, including the autographed one, a jersey card, and a few parallels.

I don't know why Topps didn't put him in the '99 set. He was one of the few Rays that actually did ok in 1998. I'm assuming maybe just because of the small set size and how small the market is for Tampa Bay fans. It would've been nice to get a sunset card of him in the '04 set, but he didn't put up very good numbers, so it's easy to see why he got left off. I'll give him his sunset card soon enough.

His '99 card was easy enough to make. If you have the template, all you have to do is basically put it over a decent picture and rotate it and put in the name and team. In thinking about maybe doing a post where I either post templates for all the teams in a certain Topps set, or maybe post templates for every Topps set from 1951 to the present and just select a random team for every year. If that would interest you, let me know. Thanks for checking out my latest post.
-Jeremy

Posted by Jeremya1um at 8:25 AM No comments: