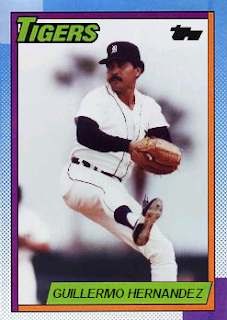 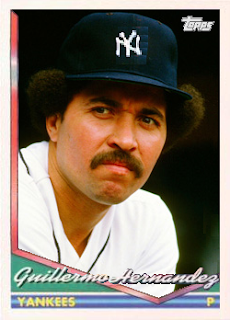 I decided to make 2 'sunset cards' for Guillermo Hernandez. Most Detroit Tiger fans know that Guillermo's last year was 1989 and that he didn't get a card in the 1990 Topps set. So I created his 1990 Topps card. Few people (including myself until a few weeks ago) knew that Hernandez was a replacement player for the New York Yankees in 1995 during Spring Training while the regular players were on strike. An arbitrator ruled the strike over shortly after Spring Training ended, so Hernandez and over 700 other players never got to play that year or appear in any card sets. Since no sets were made featuring replacement players, I decided to make a 1994 Topps Traded card of Guillermo, since his replacement player appearance marked the official last time he put on a Big League uniform. I figured that since Topps already put the 1995 Series 1 set out before Spring Training (I believe in either January or February of 1995), that I would put replacement players in a 2nd series of 1994 Topps Traded cards, as if the set had been released shortly after the replacement players signed (I'd guess January 1995-late February 1995). So imagine that the '94 Topps Traded (Update Series?) was released in early March of 1995 (instead of Topps having to issue '95 Series 2 in March, just a few weeks after Series 1 came out), and that all the replacement players got cards, and this is what you would get.
I decided that I'm not going to make anymore backs to the cards, unless someone really wants them. It just saves me time, and makes the cards alot easier to make. Hope you enjoyed these 2 cards, and thanks for checking out my blog.
-Jeremy
Posted by Jeremya1um at 5:04 PM No comments: