I was reading a blog post a few months back (I don't know who wrote it), but they basically questioned why Alex Trebek hasn't been on an Allen & Ginter card yet. Champions like Ken Jennings and Austin Rogers have, but not Alex. I figured that since Mr. Trebek was diagnosed with cancer this year, that maybe Topps would decide to include him in the set, but since I am too lazy to look for preliminary checklists for the 2019 set, I guess that will remain to be seen. That got me thinking of maybe making a custom, and then looking at other customs for the set. That led me to create a list of (most) of my favorite TV shows, and include Allen & Ginter customs for them. Since this is a baseball card blog, and there aren't any sports shows represented, I thought I would start off with a 2009 Allen & Ginter Usain Bolt custom. I don't know why Topps didn't cash in on Bolt during the height of his popularity. 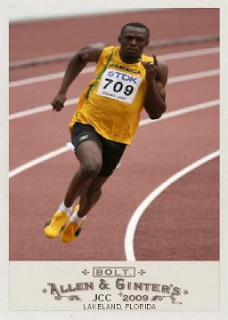 Here is the list of (some of my favorite TV shows). 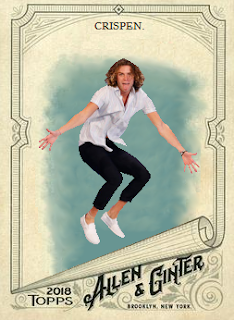 1. BIG BROTHER (2018 Allen & Ginter Tyler Crispen custom)
If you would've asked me in 2011 what Big Brother was, I would've probably said it was a TV show, but couldn't tell you what it was about. Then in November of that year, I started dating my wife, we were engaged in February 2012, and that summer, my wife flipped the channel to Big Brother during the premier, and the rest was history. I was drawn to the fun competitions, the endless ways the game could be played, and just how difficult it was to win. I loved the backstabbing, alliances, throwing competitions, and just about everything about it. I was hooked by a few episodes, and have watched every season since. I chose Tyler for the custom, as he was on last season. He came in second place, but I think the jury voted wrong, and Tyler played a way better game. He is one of the best players I have ever seen play the game in the 7 or so seasons I have watched. 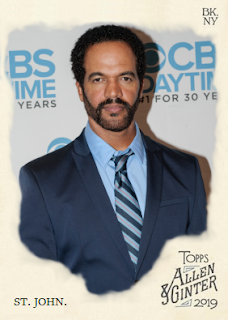 2. THE YOUNG & THE RESTLESS (2019 Allen & Ginter Kristoff St. John custom)
Don't judge me, but my wife also got me hooked on The Young & the Restless. Although some of the plot twists can be dramatic and unrealistic, it always leaves you hanging at the end of the episode and leaves you wanting more. Kristoff St. John played Neil Winters, and he tragically passed away this past year, so I decided to give him a custom. 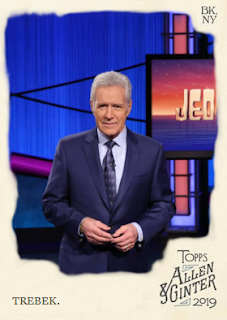 3. JEOPARDY (2019 Allen & Ginter Alex Trebek custom and James Holzhauer custom)
I may miss an episode every now and then, but Jeopardy is something nice to watch in the evening after my son goes to bed. I like trying to see how many questions I can get right, and most of the time, I have a decent chance at running any sports catergories. Alex, of course, gets the first custom, but how can I post about JEOPARDY and not include James, who would've set the all-time record for most money earned if not for that lame lady who only beat him who could only last 3 days afterwards. I still don't know why he didn't bet it all after final Jeopardy. He would've beat her with his bet or everything, and the way she was playing, you didn't know if she wouldn't get it, and you have to bet FOR yourself, and not against. 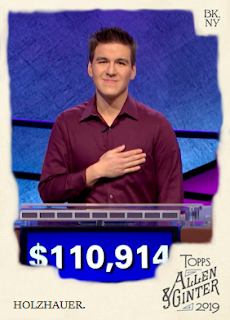 4. PROPERTY BROTHERS (2011 Allen & Ginter Scott Brothers)
I'm probably stretching things here. I think I love shows like Fresh off the Boat, World of Dance, Forensic Files, Law & Order SVU (about 8 seasons ago before it got all anti-Christian and political) a little more, but I figured I would keep this post with shows that most people have heard of or watch. Property Brothers is good to watch for a few episodes in a row, and it's not as boring as most of the other shows on HGTV that sometimes make me want to blow my brains out if I see more than one episode in a row (Love it or List it, My Lottery Dream Home). The Scott brothers are pretty popular, and recognizable, so why wouldn't Topps put them in their A/G set? 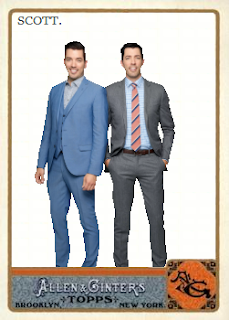 That just about covers it. I could probably list more shows, but I really wanted to get this post done before I had to leave the house, and these customs took a long time to do. One last one, though. I have never watched an episode of Walker, Texas Ranger, but why, o why has Topps not made a card of Chuck Norris?  Can you imagine how much the cards would go for if they were lucky enough to land a relic from Chuck or sign him to an autograph contract. I would for sure want one of each, and he would be the pull of the product, in my opinion. Here is a 2009 Allen & Ginter of Mr. Norris. 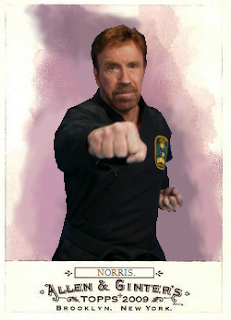 I have finally finished organizing my Favorite Player binders, and just have my Highlights, Rookies, Relics, Shiny, and new Sunset card binders to go. I think I'll take my time with them. I have pictures taken of all of my PC cards, so I will try to update them soon. I have also almost finished the 1964 Topps missing player checklist, and it will probably be done by the end of today. I am toying with the idea of not only finishing the 1953-1963 Topps checklists, but also completing the ones from 2002-2018. Those last ones might kill me with all of the roster shuffling, but it's possible. The year is almost halfway done, so if I could finish a few more checklists as well as all of the customs in the 1993 Topps set, I will call it a win.
I hope you enjoyed this latest post about some of my favorite TV shows. Are there any I should add of any cards from the Allen & Ginter sets that they should make? I'd love to hear ideas.
Thanks for checking out my latest post.
-Jeremy