In one of San Jose Fuji’s latest posts, he mentioned how he liked magazines such as Beckett during the ‘90’s. I just happen to have a few Beckett’s from that era, so I thought I would do a post and look back at one of them. This one is from the December 1996 issue.
I have no clue who is on the cover, because both the front and back are ripped off from years of love. I must’ve got this one for Christmas that year. 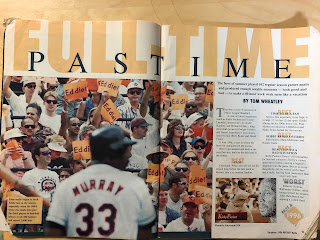 The issue starts off with a Best & Worst article, highlighting some of the highlights and lowlights of 1996. 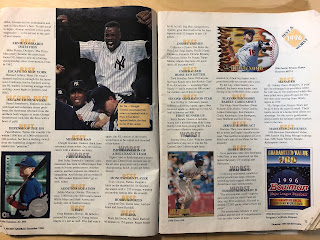 Beckett didn’t realize how prophetic they were about Bud Selig. He sucked in 1996, and he sucked during the rest of his tenure as Commissioner. I also liked how they acted like the Detroit Tigers were so bad. They needed to wait until 2003.
The inserts mentioned were a nice memory of when inserts were actually fun and not the same crap Topps gives us year after year.
I also liked how the hobby trends called out companies on making pointless low-numbered cards and unnecessary parallels. 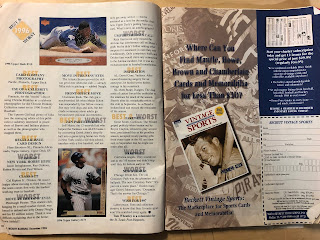 I liked the last one. Although there have been rumblings lately of negotiations not going well, baseball hasn’t had a work stoppage since 1994. 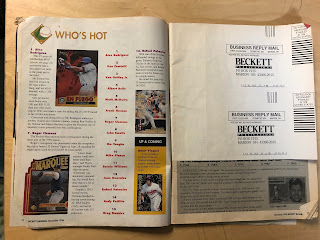 I wasn’t a big fan of the Who’s Hot list. I enjoyed the Hot List as far as cards and sets. I figured I followed baseball closely enough that I knew who was hot and who wasn't, so this section was always a waste of time for me. 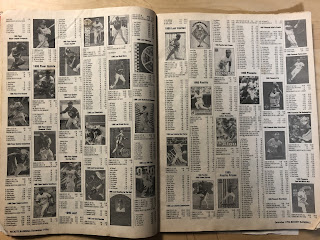 Oh, the old price guide! Every insert set listed. Many cards listed per set. Now, you just get any of the hot or stood-the-test-of-time rookie cards, a calculator for Hall of Famers' autograph and game-used cards or #rd cards, and that's about it. 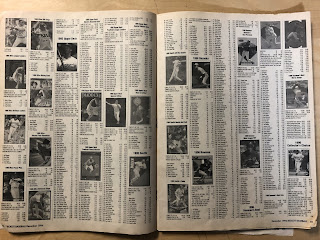 I figured I would scan a page of the current years' Bowman set and let you look at some of the prices. Not too many guys from that set panned out. 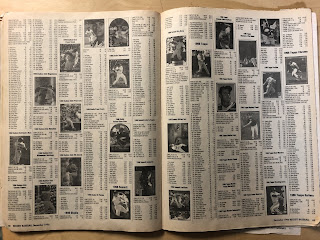 '96 Topps was always a fun set for me. I remember pulling a '52 Mantle reprint out of a pack that had a Ken Griffey, Jr. base card showing at the front of the pack. I thought I would've been able to retire when I pulled those 2 cards as a 13-year old. 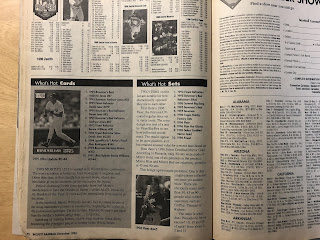 Here is the Hot List I cared about. Most of those cards still hold some value today, apart from the '91 Ultra Williams. Bernie had rookies in '90 Bowman, Donruss, Score, and Topps, yet an Ultra card from the next year was his most popular one. Go figure. Note the number of shows in the page next to it. The hobby needs more card shows. 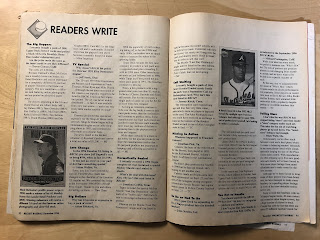 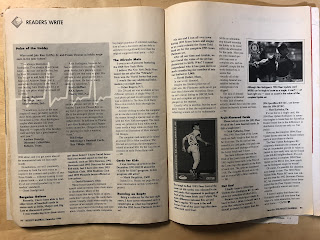 Readers Write was always a laugh for me. Either some guy wanting to know if a card with a mis-spelled name was worth thousands of dollars, or someone complaining about a card being tough to pull and not worth what they spent to try to pull it from packs. This one is no different, with guys asking what set cards are from, a guy thinking a wrongly numbered card would be worth a lot, and a guy complaining that A-Rod's rookie wasn't worth more. I would love to see some of the rejected letters. It's kind of funny reading the Pulse of the Hobby about 13 years later and seeing that all of these guys (save Andruw Jones and A-Rod) are Hall of Famers. A-Rod might get elected, and Jones deserves more consideration with his Home Run total and his gold gloves. 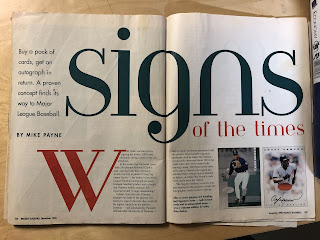 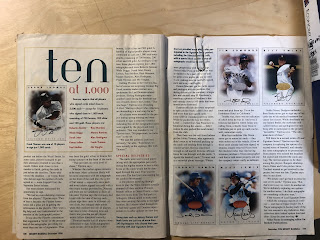 Here is an article about 1996 Leaf Signature Series when it first came out. It shows that Beckett doesn't keep a good archive system. I read somewhere in the last few years about an Otis Nixon  card from the set that nobody had any info on. If Beckett would've kept this article, they would've known that the cards were stolen from Nixon's car, and that's probably where they came from. 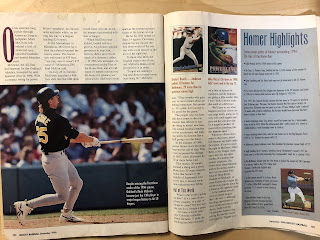 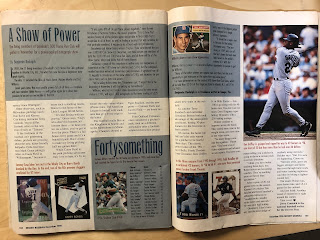 Lastly, an article about all of the Home Runs in 1996. I love the comment in it about steroids.