Out of routine, Hurricane Ian, and 2022 Topps Chrome

This has been probably one of the craziest 2 weeks I've had in a while. If anyone knows me, they know that I kind of like to have a routine and do things the same way, and just everything right now is so we can't have it that way. It's for the best, but my mind is freaking out just a little while going through it.
As you know, we are painting our house and getting some laminate wood flooring across the whole house as well. This will be great for allergies (and I personally look forward to seeing how far I can slide across the floors while wearing socks), and the paint will make the house look nice and hopefully increase value if we end up moving during the next few years, or just give it that touch that makes it feel like ours if we end up staying for a while. The bad part is that all of this involves basically packing most of our belongings up in boxes and totes until the floors get installed. Fortunately for us, it is supposed to happen on Wednesday and Thursday. I think we are about halfway there, still need to get a little more done in mine and Karen's room, the entire guest room, a closet or two, and bathrooms. I'm freaking out a little, but we all know that with things like moving, that it eventually gets done and all right before the buzzer. I'm off tomorrow and Tuesday, so hopefully I can get some stuff packed those days. We will be picking up all of the flooring tomorrow and stacking 83 boxes somewhere in the dining room/kitchen, but hey, I lift 5 or so 40-lb boxes of flour on days I mix bread at work, what are a few boxes of flooring?
The hurricane also threw some non-routine things into our plans this past week. I was fortunate to be off of work on Tuesday, but had to bake on Wednesday. I really expected the store to stay open normal hours (until 10 PM) that night, but there was a video of one of our stores in Miami getting a tornado in the parking lot during one of the first small squalls while the store was still open, with cars getting flipped and stuff, and I bet corporate didn't want that look again, so they ended up telling us we were going to shut down at 5PM. That was nice for me, because they let us quit setting things up, I was finished baking, so I didn't have to put anything else into our proof box or ovens, and I just got to clean up and try to go home. We ended up staying at Karen's work. She is the Executive Director of an assisted living facility in Port Orange, Florida, and whenever there is a hurricane, she has to stay in the building until it passes over, so it was basically like she was at work but with a storm, and family was allowed to stay, so Kyler and I came and the 3 of us stayed in an empty room at the facility. 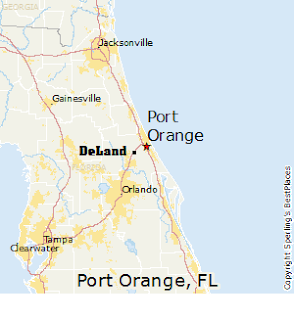 That kind of gives you an idea of where we are. DeLand is basically exit 118 on I-4, Port Orange is a few miles off of exit 128 on I-4, and Daytona is a few miles North of Port Orange. I work in Orange City, which is exit 111, so after I got off work, I drove home North to DeLand, packed up anything I needed and anything Karen forgot, and drove to Port Orange, and met Karen and Kyler at her work. We had some friends stay at our home and they kept us updated.
Now I have lived in Florida since 1991, with a year in Montgomery, AL in 2001, and 3 years in Montgomery, AL from 2006-2009. I have been through a few dozen hurricanes, and this one was probably one of the worst ones I've seen. I've been through one that took down most of a tree in our house. I've been through one that knocked the power out for 2 weeks, but this one just had so much rain. We have been getting a good amount of rain the past month. Enough that my county had a flood warning before this storm came to be. Karen's work had a good amount of damage. Ceilings leaking, water coming through doors, a tree falling in the parking lot, fences torn down, and flooding everywhere outside. When I had to drive back to work on Friday morning, one of the streets I took to I-4 was just flooded about 300 feet after I turned onto it, and I had to turn around and find another way. 2 people at Karen's work lost their homes because flooding was like 5 feet deep in the house. Many other people had 1 foot flooding. Just about everyone lost power. I think Daytona, Port Orange, and some of the cities along the coast got it pretty bad, but that's just from what I've heard from people I've ran into that live near me. Other cities down south got it bad, too. And compared to Puerto Rico and the hurricane they had earlier, Florida got nothing. Back in DeLand, many people lost power. A few months ago, these construction workers did some digging in our front yard and it was all to put the power lines underground. It looked like they left the job unfinished, and we just assumed they were going to come back and do some work at some point. I guess we never lost power, so either the power lines are underground or we just got lucky. A few branches fell down, but all of my flowers survived and didn't really even show signs of leaning to one direction because of the wind. We did have some water get into the kitchen and laundry room, but our friends were able to get it up with a shop vac and some towels. I'm a little concerned that we have mold because of that, but we hope to get some mold people to look at it, plus the floors are coming up anyways and they might be able to give us some advice when it gets instatlled, and were going to get some mold spray and damp rid when we go to Lowes tomorrow to pick up the floors. The hurricane did some major damage and interrupted our routine, but we were lucky.
I went to work Friday morning, and Karen and Kyler packed up and came home at noon. It was nice to sleep in our own beds last night as the mattresses we slept on at Karens work just killed my back. Saturday it was almost a routine Saturday except Karen's mom stayed with us since her power still isn't on. I went to work, had lunch with Karen, Kyler, and her mom, finished up work, and then came home. Karen usually goes to Target after having lunch with me, and more often than not will look at the baseball card aisle to see if they have anything that interests me. A few weeks ago, Night Owl posted that it had been years since he purchased Topps Chrome. It had been the same for me. I think 2018 was the last year I did. Well, Karen found a blaster of Topps Chrome, and picked it up. I'm waiting for Update so I can finish my 2022 set and get to work on my master checklists of missing players, but it is nice to have a product out since nothing really has been on the shelves since Series 2 came out. My blaster had 7 4-card packs, and I think I got some decent cards. I was really hoping to pull a Wander Franco but I came up empty, and I almost want to get another one, but I guess I can always find one online in a month or so when the prices go down. 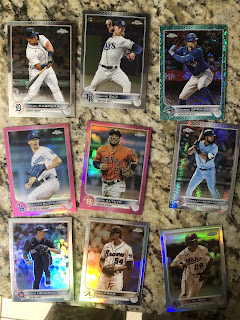 I did pull a Miguel Cabrera and a Shane Baz for my 2 favorite teams. It's a shame Baz will miss next year, but here's hoping he will recover, and he could head a 2024 Rays rotation of Shane McClanahan, Tyler Glasnow, Drew Rasmussen, Luis Patino (all a with a year more experience), and dark horses like Brendan McKay, Jeffrey Springs, and whoever they can get in free agency. It has me drooling already. The refractors really stood out to me. I guess the Aqua ones are new this year, and I pulled an Aqua Mini Diamond version of George Springer #d to 199. My Pink Refractors were Walker Buehler and Jose Altuve. I pulled a Fish-Fractor of Teoscar Hernandez, and a regular refractor of Kyle Hendricks. My 2 Sepia Refractors were of Max Fried (It's yours if you need it, Johnny) and Matt Olson. 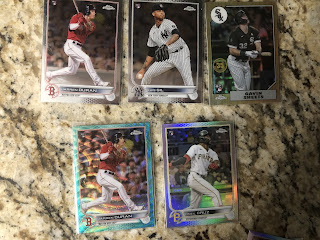 I also pulled some nice rookies. I got regular versions of Jarren Duran and Luis Gil. I always look at the back of any Luis Gil cards I get, because he started Brody Koerner's MLB debut game, and it was the first time in Yankee history or something that 3 players made ther debut in the same game (Gil, Stephen Ridings, and Brody). I'm hoping one of Gil's cards mentions it and Brody's name on the back, but so far, nothing. The Gavin Sheets is an insert, and I guess technically counted as a Refractor since the pack I pulled it from didn't have one. Funny, because the '87 inserts don't have a version without a refractor sheen, so I'm technically getting gyped a refractor for every time I pull an '87 insert from Chrome. The last 2 cards are an Aqua Lava Refractor #d to 199 of Jarren Duran, and a regular refractor of O'Neil Cruz. Not too bad of a blaster where I got 2 cool Aqua Refractors, only 2 regular refractors, pulled a few team guys and also got some nice rookies. This box is making me want to get another one really bad. And those Twitter mojo hitz flipper bro's are sad because the set doesn't have Spencer Torkelson and Julio Rodriguez and Bobby Witt, Jr. I didn't notice.
The cards were a nice treat at the end of a chaotic week. I'm off tomorrow, get to play in the church band, see how everyone there fared, and then hopefully finish this flooring and get stuff unpacked and back to normal...until another hurricane comes.
Thanks for checking out my latest post..
-Jeremy
Posted by Jeremya1um at 6:35 PM