Feels like the last few days have been a blur. Karen had a follow up appointment with the Neurosurgeon last Friday. They wanted her to go to the eye Dr. and make sure her optic nerves still had a lower pressure. She was able to make the appointment on Tuesday. Long and short of that was it was the same as before her last surgery, so neurosurgeon wanted to do exploratory surgery on Thursday afternoon. We found this out on Wednesday, and naturally, I let work know, and told them I could still work my shift Thursday morning and would just need Friday off. Later that day,  the hospital had a cancellation, and rescheduled it for 9 AM, so I had to call work and ask for Thursday off as well. Naturally, that went well, and boss got on to me for not letting him know sooner. I’d love to swap lives with him.
The surgery went well, I think. Everything was working, but the valve wasn’t draining as fast as it was expected to. Dr. Murad ended up taking the old valve off, replacing it with one that drains more, checked it to see how it drained (just like he expected), and then sewed her back up. We’re back home, and Karen is resting as best as she can, and we’re hopefull that this will bring her some relief from the headaches and nausea that have been getting bad again.
While this was happening, I got some cards. My COMC order came in on Friday, and I got to sort through the cards today. 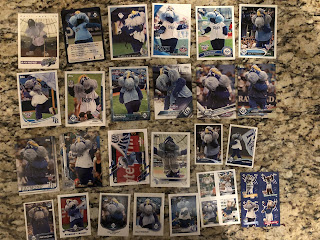 I got the last few cards and stickers of Raymond that I needed to finish my Topps and Topps Stickers Raymond runs. Not sure exactly which ones I got in the order, but they are all in there as well as a few I pulled from packs and ones I got from nice bloggers over the years. Kyler should have fun looking at all of these, and hopefully we’ll get some signed over the years at Rays games and maybe finish them all off. 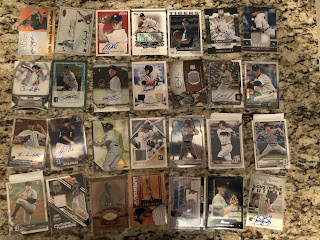 I mainly added a bunch of autograph and relic cards of Rays and Tigers to my collection with the order. The Andrew Miller card would’ve went for a nice price back in 2007. I’ve been wanting to pull the trigger on Spencer Torkelson and Casey Mize Bowman rookies before they get too high, so I found some for prices I was willing to pay. Even found a jersey card of Tork for a decent price. 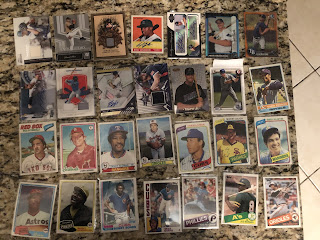 I found a BJ Upton autograph for 2 bucks. I’m still surprised I got one for hat price. I finally added a Randy Arozarena jersey card. The Travis Lee Bowman Chrome would’ve went for good money in 1997, and the Bobby Witt, Jr. Bowman goes for decent money now.
I decided to add most of the affordable sunset cards that I needed. Looking at the backs of some of them and seeing the vanilla names in the Hall of Fame now makes me think some of these guys might join them in the next decade. 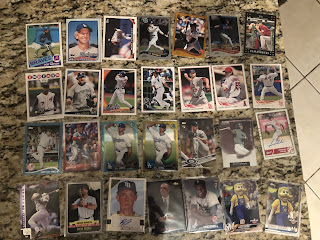 The Sutton is a box bottom. While not a ‘true’ sunset card, it does have the ‘89 Topps design which would’ve been used on Sutton’s sunset card. Some of these ‘90’s guys like Lofton, Delgado, and even Dye will hopefully get a shot at the Hall with some of these semi star guys like Raines, Baines, and Hodges getting in.
Last up are some favorite players. I’ve been wanting a Jordan Hicks autograph for a while. The Quinton McCracken was part of a bunch of ‘98 Upper Deck cards that I ordered to finish up that Rays set. I also finished off ‘97 Bowman, ‘97 Fleer, and ‘97 Topps Stars Rays sets with the order.
Kyler has always thought that Geicko commercial where Dick Vitale dumped Gatorade on himself was funny, so I got him a card of Dickie V. I met him at a Rays game and got his autograph, so if we go to another Rays game I might try to bring it and get it signed. I also got Ky a Jackie Robinson card and 2 of Bernie Brewer, one of his favorite mascots.
To follow up the story about the seller on the last post about the guy who ghosted me, we were at a concert in Jacksonville on Tuesday, and I was in line getting a soda when I got a text. Let’s see what you guys think about this. 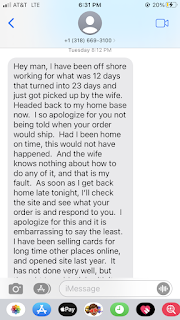 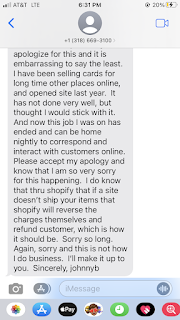 So the guy got back to me and I kind of expected him to send me a follow up reply the next day or so. I didn’t get a response that night, so I sent him a message on Wednesday morning just letting him know which card I ordered. No response with that one, so I followed up with him this morning just asking for an update. Nothing so far. 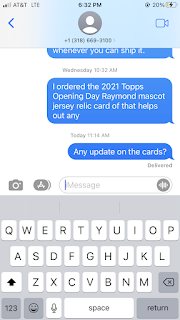 I kind of think he got scared after my earlier text when I told him about all of the lawyers and people I knew and made up the stuff about the work stuff just to calm me down. I might wait a week and call him out on it if nothing happens, but you never know, maybe it’s legit. We’ll see and I’ll keep everyone updated if anything happens.
Hopefully I’ll start putting some of the new cards in the binders on Monday, Karen will heal and this last surgery will bring some relief, and JohnnyB will finally ship my card. Not too much to ask, right?
Thanks for checking out my latest post.
-Jeremy
Posted by Jeremya1um at 3:43 PM