Latest rip to the card shop

My last post was a little Covid-heavy, but I really expected at least a few people to ask me to pick them up some cards when I went to my LCS yesterday. Nobody took me up on the offer. Tough crowd. I still made out with some nice cards, and some stuff that I'll hopefully have shipped out in the next week or two.
I was planning on mowing the lawn, but ended up putting it off until next week, and that gave me time to look through 4 or 5 boxes of .50 cent cards, as well as a pencil box with some loose Rays and Tigers cards in it.
I've been to the shop enough to know that the owners, 'Pop' and TJ know me as the 'Rays guy', and they had a stack of Rays for me to look through when I got there. That was a nice touch. 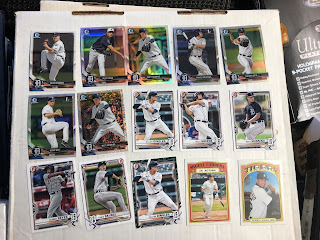 I'll start first with the Tigers I found. Somebody must've had a bunch of 2018 Bowman Refractors, because I found some from a number of different teams, including the Tigers. I wish I would've had that Parker Meadows in 2018, I saw him play at West Michigan that year when I was on vacation, and was able to get him to sign a custom, but I always love the look of a signed Refractor. I also got some 2021 Bowman's, including 2 of Dillon Dingler, the Tigers 2nd pick in the 2020 draft behind Spencer Torkelson. I still need to get a Torkelson and Casey Mize 1st Bowman card. Not pictured are the 2002 Topps Tigers I pulled from the pencil box, leaving me a handful short of the (non-Traded) '02 Topps set. The Heritage cards leave me 1 card short (Spencer Turnbull) of the 2021 Topps Heritage Tigers set (including SP's!!). 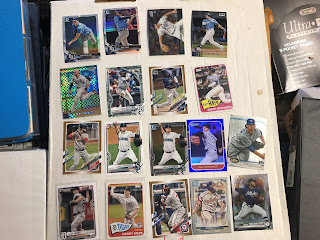 I didn't have as many Rays, but did find some nice '18 Bowman Refractors and '20 Stadium Club Chrome cards. I'm still high on Brandon McKay (and Brent Honeywell), even though they have been injured for a good portion of their careers. The Rays could have a starting rotation of Glasnow, Shane Baz, Honeywell, McKay, Shane McClanahan, and easily trot out Ryan Yarbrough or another power arm in AA or AAA in the future. If only it were that easy. They just traded 2 more good arms (Drew Strotman and Joe Ryan) for a steroid abuser (Nelson Cruz). This move ticks me off for a number of reasons. First, because they should've made this move in addition to keeping Blake Snell. Imagine the club with Snell at #1 with Glasnow as your #2 guy in a 5 game series. Cruz could put them over the hump with Snell still there. Now he just helps keep you getting in the playoffs, but you still don't have the solid 1-2 starting pitching punch like you would've if Snell was still on the club. Second, Cruz is a steroid abuser. There is always the chance he will get caught, and he's not going to keep up his HR production without them. He's been caught with them before, and I don't know why nobody mentions it and keeps talking about him being a great person and good for the clubhouse. On top of that, he's only a rental, since he's a Free Agent at the end of the year. Lastly, Ryan and Strotman are good pitchers, each one on the Rays Top 30 Prospect list. Some of these trades that the Rays have made where they give up a minor leaguer to acquire a Major Leaguer have stumped me. They gave up Jesus Sanchez to get Jesus Aguilar, and they only rented him for a few months. Sanchez was a top prospect before he was traded, and he's one of the top prospects for Florida now. In the Jose Martinez trade, while they did get Randy Arozarena, they gave up Matthew Liberatore, who is a decent pitching prospect. Martinez was basically gone after a few months, with nothing to show for it. I'm just scared this trade won't get the Rays any further in the postseason, and they will have nothing to show, and Minnesota will have some good pitchers for a decade or so.  Back to the cards, there were some Arozarena cards in that stack they saved for me, and I happily got them. I'm trying to hold off on getting any 2021 Topps singles, since I plan to get the set as soon as they come back, and I did a good job, just getting some inserts and parallels from the set.
For Favorite Players, I found a 2021 Topps Gold of Paul DeJong, a 2021 Bowman and Bowman Chrome Logan Gilbert, a 2021 Donruss Blue Orel Hershiser, a 2012 (or 2013?) Finest Drew Hutchison, 2 Casey Mize cards from 2021, and cards of Michael Taylor, Eric Thames, and Touki Toussaint.
As for stuff I got for trades, I found some Refractors, a few parallels, and other cards that will be thrown in to packages in the near future.
I’ve been hitting the 1991 Topps set like crazy, finishing all of the missing cards as far as Major Leaguers. Just have to do some stadiums, team photos, and a few Future Star cards to finish the set, which I think I can get done by the end of the weekend with any luck. Next up will be the 1991 Traded set, and then I think I’m leaving to the 1990 Topps set. I know I’m trying to get all of the players from the ‘90’s finished, but the ‘90 Traded set (as well as some from the regular set) will meet that criteria, and I’ll be missing out on that criteria on the back end as well, as the cards from the 2000 Topps Traded set will feature guys from 2000, not 1999. I just feel that 1990 will be a heck of a lot easier than my next option (1995), as it has only 1 font instead of 2, 2 less teams to deal with, and a lot less players overall. Plus it will still give me a run of complete sets in a row (1990-1994), as opposed to 1991-1995.
That’s about it. Thanks for checking out my latest post.
-Jeremy
Posted by Jeremya1um at 6:49 PM