I figured on April Fools Day, why not post about an idea I’ve been kicking around in my head for a series of posts. Before I do a ton of more posts,  I do want to get everyone’s opinion on it, so if you think I crossed the line between funny and disrespectful, let me know.
I try to keep this blog kind of family-friendly, but many people that know me know that I find things funny that are unexpected, kind of gross, and sometimes border on irreverent. That must be where I got the idea for this post from. I’ve noticed that sometimes when I buy Bowman cards, that a player name sounds familiar, and sure enough, they are the child of a former Major Leaguer and the back of the card usually says so. Many times, it is an instance where the dad was just a fringe major leaguer and the son was a lot better. Other times, the dad was pretty good, and the son just happened to get drafted midway or close to the end of the draft and got a Bowman card. Either way, you might just have the tools necessary to play a game that I like to call ‘Dang.  They got laid.’
I’ll be the first to admit that the girls didn’t come rushing to me in middle school, high school, or even college for that matter. I was shy, sheltered because of being home-schooled, and I lacked self confidence. I went on dates with a few random girls in my early to mid-20’s, but they were few and far between, and I just really didn’t know what I was doing. I also basically knew what I wanted in a woman, and that kept me from pulling the trigger on a number of ones that might have bit. Somehow, I met my wife on an online dating site almost 10 years ago, and everything just happened so fast. If not for the internet, I might still be living with my dad and hoping to meet a girl at work, church, or a ballgame. I guess what I’m saying is that yeah, I’m probably making fun of people, but I was in the same boat.
So the way I’m going to play this game is im just going to find a guy who played in the Majors that looks fairly odd on one of their cards. The player has to have had a son (or sons) that also played pro ball and have a card. I’m going to show both cards as proof that the dad got laid, and kind of give my thoughts on the dads card. If everyone likes this, I’ll look for some more guys like that and maybe do a post like this every few weeks or every month. 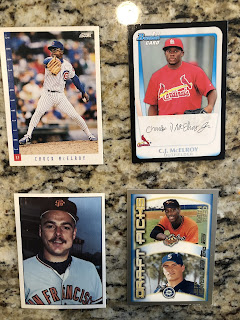 Victim number one is longtime reliever Chuck McElroy. Chuck was a valuable lefty for many teams, including the Cubbies, whom he is pictured with on this card. I don’t know if you think so, but I think with the glasses and expression on his face that Chuck looks like Steve Urkel from Family Matters. Can’t you picture him uncorking a pitch that hits a batter and then saying ‘Did I do thaaaaaat?’  Somehow, even with the resemblance to Steven Q. Urkel, good old Chuck got laid, and we have the Bowman of CJ McElroy to prove it.
The other victim I have today is of former Giants pitcher Dave Heaverlo. On this card (it even mentions it on the back), Dave’s haircut is more tight than Stuart Sternberg’s pursestrings during free agency. It’s obvious that he can grow hair with that mustache, but for some reason, he just chose to shave the sides (and maybe the top) with a number zero on the razor. Add to that the big wad of chaw in his left cheek, and you can see why I picked him for this post. Apparently some lady picked him as well, because next to him we have a card of his son Jeff, who was of the Mariners top draft choices in 1999. At least on Jeff’s card we can at least see some sideburns as proof that he might be growing a little bit of hair underneath that cap.
That wraps it up for the first (and maybe only) edition of ‘Dang. They got laid.’  Let me know what you think.
It’s opening day, and the Yankee$ lost, my Tigers won, and my Rays are up by 1 in the 8th. Not too bad. My wife had been out of town for work, so I’ve been taking advantage of having a little more time to myself, and now just have the Mariners, Rangers, and Blue Jays left to add loose cards to their binders. I might just get it done by next Friday when we leave on vacation. The only thing that is going to hold me up is just going to be work (which was hellish today, only 2 more days to go and then holiday is over!!!!!) and having to mow the lawn on Tuesday. It was kind of long to begin with, and we might get some rain the next 2 days, so it might take a while. We’ll see. I’ll try to get a post in Thursday night before my last day of work.
Thanks for checking out my latest post.
-Jeremy
Posted by Jeremya1um at 3:44 PM