Yesterday I was off and decided to put all of the recent Rays pickups I have into my Rays binders. After putting them all in, I am up to about 6 2-3 inch binders. This includes a complete run of Topps/Topps Traded cards (1997-2020). I am really excited and proud of that, as I am a big Topps guy, and because it is covers the franchise in its entirety. If only I could do that for the Tigers.
I also wanted to pay homage to the first Rays team, so I decided to print out all of the missing Devil Rays Topps cards from the 1998 set. Those customs, along with the Devil Rays from the 1998 Topps set wind up being a stack that looks something like this. 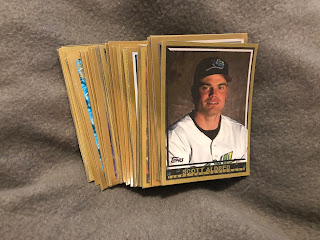 The team wasn't really good in 1998, finishing last in the American League East. I went to 3 or 4 games that first year, seeing them play the Athletics, and I believe the Red Sox and Twins. So many memories from those games, but I might do a post like Night Owl recently did, and kind of go through an entire year with memories, and card stuff. 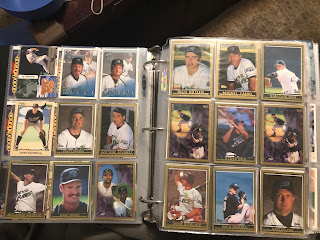 Not many stars on the team. I’ll go ahead and list the guys with each picture. All of these guys either played for the team in 1998, were taken in the Expansion Draft, or were prospects that Topps chose to include in the ‘98 set. From top to bottom, left to right: Scott Aldred, Wilson Alvarez, Rolando Arrojo, Wade Boggs (somehow he got a Yankees card in the ‘98 set, but no Devil Rays one), Cedric Bowers, Rich Butler, Miguel Cairo, Dan Carlson, Dustin Carr, Steve Cox, Luis Cruz, Mike Difelice, Mike Duvall, and Dave Eiland make up the first page in my binder. 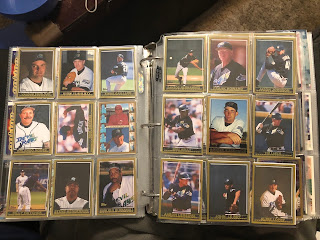 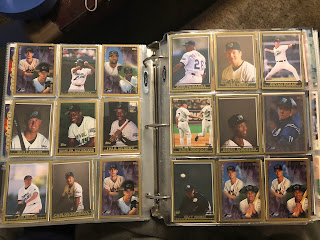 Page 3 is James Manias, Dave Martinez, Marcus McCain, Scott McClain (always confused those last 2 guys), Quinton McCracken, Fred McGriff, Jim Mecir, Carlos Mendoza, Pablo Ortega (the guy who threw the first pitch in organization history). Jose Paniagua, Herb Perry, Bryan Rekar, Greg Riddoch, Kerry Robinson, Larry Rothschild, Matt Ruebel, Alex Sanchez, and Jared Sandberg (who each get their own card even though it is the same one and they are right next to each other in the binder). 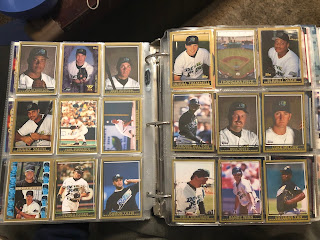 The last page is Julio Santana, first overall pick of the expansion draft Tony Saunders, Dave Silvestri, Bobby Smith, Paul Sorrento, Dennis Springer (who only pitched 1 year in Tampa, but I swear I saw him pitch like 4 times and saw him give up dozens of Home Runs off of his knuckleball), Jason Standridge, Kevin Stocker, Ramon Tatis, Bubba Trammell, Tropicana Field, Terrell Wade, Jerome Walton, Rick White, Luke Wilcox, Rick Williams, Randy Win, and another guy who gave up tons of Homers that I saw pitch in just about every game I went to, Esteban Yan. A bunch of guys you’ve either forgot about, or never heard of, but many of the names bring back memories of games attended in person, games watched on TV, or baseball cards for me. A special thanks to everyone who has traded with me and helped me add cards to my Rays Topps run (and the ‘98 set in particular).
Thanks for checking out my latest post.
-Jeremy
Posted by Jeremya1um at 1:12 PM