Around the 3rd week of June, I recieved a decent sized package from John of Johnny's Trading Spot. When I say decent, I mean huge. 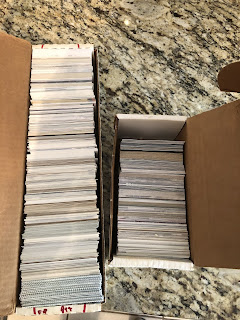 I had so much fun going through them, and it probably took a good 2-3 days to get everything organized and separated. John has been hooking me up with Rays for the past year now. I'm not surprised that he has a good amount of Rays, seeing as he spends part of his time in Ocala. Shortly before we started trading, we actually attended the same baseball card show but didn't know it. I really hope to swing by Ocala sometime or attend a card show and meet up with John whenever this covid stuff starts dying down. Ocala is only about an hour and a half away from me, and I would love to see his card room and all of the set binders he has been working on.
Ok, now on to the cards. First up is probably one of the first ever Devil Rays card sets. I know nothing about the issue, other than it has the Lykes logo on the back (they put out some Braves sets in the early '90's), and they look like they were punched out from sheets. It looks like they were from 1 or 2 of the Rays' first minor league teams, and I feel like I have to be close to having a complete set. 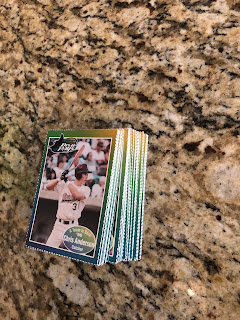 Even myself, living in Rays territory since 1990 (6 years before the franchise was even announced), didn't recognize all of the names of the guys in the set. Some guys you will probably recognize that appeared in it were Mickey Callaway (former Mets manager), Tom Foley (former utility infielder and longtime Rays coach), and Alex Sanchez (the first guy to get busted and suspended for taking PEDs). 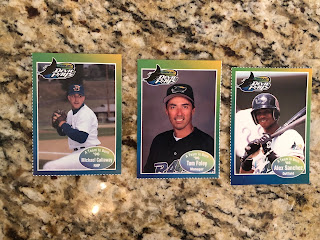 While I am only highlighting a few cards, it does not take away from the fact that this was an completely amazing box that John sent, which forced me to add 1 or 2 binders to my Rays collection. 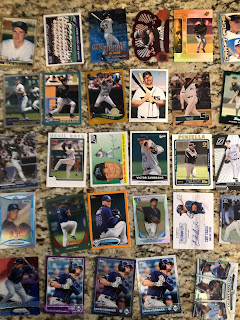 Some highlights for me included a 1998 Topps Minted in Cooperstown parallel of Rob Butler (always thought he would be a 25+HR hitter with a .300 Avg., a 1999 team photo card (still want to find a 1998 team photo), a cool insert of Canseco, a cool looking Gold Crown Die-Cut of Greg Vaughn, a 2000 SPx Vaughn (first 2000 SPx card I ever owned), and a 2000 Topps Home Team Advantage Josh Hamilton Draft Pick card. John sent near-complete sets of a few HTA and Limited Edition Topps sets, which was cool, as I've never ever come across a card from these kind of sets. The next row included a 2000 Topps Dave Martinez (I had a few copies of the Opening Day version, but never came across the plain Topps one), a 2001 Topps Mike DiFelice (had this card signed back in the day, but it got sold, as did many of the cards pictured), and a 2002 Steve Cox HTA card that I think more people should be talking about. I've always loved the photo on this card. I usually don't pay that much attention to photos on cards. Usually, I just care who the player is, and what team they are from. This photo is funny to me, as you can tell Cox is trying not to get hit by a pitch, the pitch kind of looks like it is going to hit his groin area, and his last name also sounds like an innuendo of where it looks like the pitch is going to hit him. At one point, I had the regular version of this card autographed by Cox. The next card, a 2002 Topps 206 Toby Hall, I had autographed as well, and it didn't make the cut of keepers. The Delmon Young card looked very strange to me, and I finally figured out that all of the 2003 Upper Deck cards had the players uniform number on the left hand part of the nameplate, and the Young doesn't. Also, he is pictured in a photoshopped uniform as well.The James Houser card was one I didn't have of him. I saw him play for the Montgomery Biscuits in 2006 or 2007, and I had some cards of his to get signed. As he signed, I mentioned how I had opened lots of packs since the cards I had of him had come out (2003 and 2004), and how I was surprised how I hadn't seen any more cards of his. He told me that after he had the 2 Bowman cards come out, that he reconsidered signing or something, and wanted to wait a little bit before his first Topps rookie card came out. Interesting, but I guess if you're in the minors, you don't want Topps making tons of money off of you if you don't ever make it to the show. The Marlon Anderson is a Stat Line Parallel, my 2nd from that set (Carl Crawford was the 1st). The Brazelton is a 1st Edition card. I never pulled many Rays from the 2004 Heritage set, so it was nice to see a Carl Crawford from the set. I had the '04 UD Vintage Zambrano signed before. He is one of my favorite Rays, since he put up good numbers for us, got traded, and then got us Scott Kazmir. The Lou Piniella is a 1st Edition, and the Kazmir is a Museum Collection card. The next 3 are Topps/Bowman parallels, a Glenn Gibson refractor, David Price Green, and JP Howell Orange. The Dylan Floro is a mini refractor?, and the Curt Casali might be my first Casali card, and it is autographed. Another Bowman mini refractor makes an appearance with the Justin Williams card. The 2015 Kevin Kiermaier's are as follows: Toys R Us Purple, Opening Day Blue, and Rays team set. I also believe I have the Opening Day and regular base Topps card. I love the Talent Pipeline Bowman cards, and I believe I have 2 including this one. I hope to get all of the ones eventually. 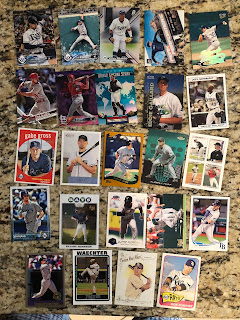 The next page starts off with a card that I should've had for a while, and almost ended up on my most wanted list. The 2018 Topps Daniel Robertson was the last card I needed to complete the '18 Topps/Update Rays set. The Kiermaier is a Holiday Metallic card. Be sure to feel all of your Holiday cards. I wouldn't have known it was different if I accidentally hadn't felt the snowflake part. The Wander Franco Bowman Platinum was an exciting card to get, and it completes my '19 Bowman Heritage Rays set. The highlights of the Rays finish up with an '19 Optic insert of Blake Snell.
Next up are some Favorite Players. First is a Rolando Arrojo I didn't have. You don't see it here, but John sent me about 20 new Paul DeJong cards. These 2 are my favorite, a '17 Topps Gold rookie, and an '18 Chrome Pink Refractor. Another DeJong, this time Sidney, makes an appearance with his World Future Stars card from 2006 Upper Deck. I already have the '99 Fleer Tradition Eddie Gaillard, but this one will go in my Rays binder. 2 additions to my Joey Gathright and Gabe Gross collections, and some nice Aubrey Huffs for his part of my binder. The Jaso is part of the '15 team set. I had never seen the '08 Chrome Elliot Johnson, even though I opened at least a few packs of it. I'm not a big Fleer guy, so if you can't find anything to trade me, I probably won't have much from Fleer sets, as it is with the Fleer Focus Quinton McCracken. The Justin Ruggiano and Luke Scott cards were new, and while I had the Topps versions of the Bubba Trammell and Doug Waechter cards, I didn't have the HTA and 1st Edition versions. I believe I've opened 2 packs of Allen & Ginter in the past 8 years, so the Zobrist was one I hadn't seen, and it can be hit or miss with Heritage for me, depending on money and if I've opened a ton of Series 1 or Opening Day or there is newer product on the shelves. I guess I didn't have this particular Heritage of Zorilla, who is now retired. 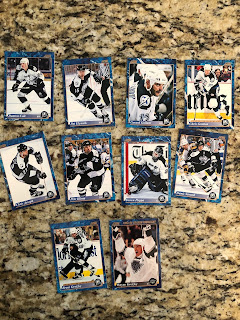 Lastly, John sent me some hockey cards. I don't collect hockey, although I enjoy watching the sport from time to time. However, these cards will definitely find a place in my collection. The first 9 cards are from the first Tampa Bay Lightning team. I remember getting some Lightning shirts pretty early during their history, and I wish I had kept them. The last card highlights Wayne Gretzky breaking Gordie Howe's goal record, and that will take up a spot in my highlight binder.

Thanks so much John for the awesome package of goodies! I look forward to playing bingo tonight (that is, if I don't get caught up at the grocery store).
Thanks for checking out my latest post.
-Jeremy