I recently got a package in the mail from Jay of Card Hemorrhage. We had emailed some about getting a little trade going. I sent him some guys from his PC, and he sent me back some nice Rays and Tigers for mine.

The Tigers hit a bunch of needs for me. As I have been working on my Tigers Want List, I have discovered that I am in need of cards for 95% of junk wax sets, as well as vintage/newer ones. Thankfully, Jay helped out with all 3. With vintage, we have a '79 Topps Ron LeFlore League Leader, a 2nd year Topps Gibby, and an '84 Topps Tigers Leaders card. I really wish Topps would make something like that in current sets. The next 6 cards represent junk-wax era, and although they might be deemed 'junk' to someone else, I was happy to get them, as they each crossed a name off of a want list for me. The Gibson comes from the Fleer 1986 Baseball's Best Sluggers vs. Pitchers boxed set. The Ownie Carroll card is from a TSN (Conlon?) set which I remember seeing in stores as an elementary schooler. Then we have 4 from the '91 Topps Archives 1954 Topps reprint set. Each card marks the first of each player for me besides Fred Hatfield. I at one point had an early '50's Topps card signed by Fred (1953 maybe?), which got sold with my autographed cards a few years ago. The rest of the page is newer stuff, a '12 Topps V-Mart, a Harold Castro autographed 1st year Bowman, 4 cards from the 2016 Topps Tigers team set, a 2017 Heritage K-Rod, '19 Big League Niko Goodrum, a 2020 Heritage Dario Agrazal, and a '92 Upper Deck Cecil Fielder for my Favorite Player Collection binder. 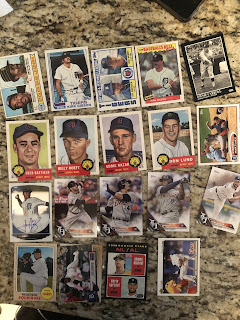 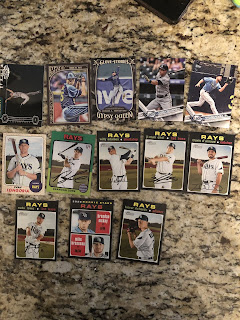 A great trade from a great new blog. Thanks, Jay.

As for the pick pockets mentioned in the title, Julie from A Cracked Bat has a page on her blog called 'Pick Pockets', where you basically can pick from a number of cards she has listed that she will send you. I found a few that fit my collection, so I 'picked' them, and they arrived in my mailbox yesterday.
I had only picked 2, (a 2016 Heritage Pat Venditte and a 1999 Topps Stars Chipper Jones), but Julie sent a full binder page of cards. An unexpected kind gesture, and I definitely wasn't expecting to find what I did. I got a sweet looking 1998 SPx Finite Wade Boggs for my Rays binder, a Pacific Ty Cobb, a 2011 Bowman Platinum Avisail Garcia rookie card (one card of which I had got signed at one point and then sold), and then comes the wow card, a 1960 Topps Paul Foytack. 1960 Topps cards don't just pop into your lap, and when they do, not for free. I about fell out of my chair when I saw it. The last 2 cards besides the aforementioned PC guys are 2 1993 Cardtoons cards of Alan Trammell and Cecil Fielder. 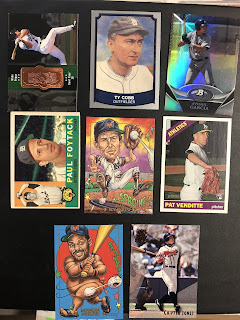 Thank you, Julie for the nice surprise cards in addition to the ones I picked.

That should wrap it up. I have 1 more trade to post about (hopefuly by the end of the weekend, and a few more that should be one the way, so the posts and updates to the Want Lists should keep coming for a while.
Thanks for checking out my latest post.
-Jeremy