Trade with Cards on Cards and Diamond Nine pickup

I recently made a trade with Kerry from Cards on Cards. I sent him a box of Cardinals from his wantlist, and he sent a similar box back with a ton of Rays and Tigers from just about every set imaginable. 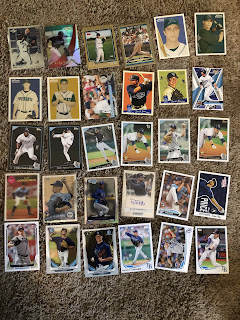 We start off hot, with a cool '98 Score Fred McGriff parallel. One of my favorite cards from the box was the '06 Bowman Heritage Evan Longoria rookie. This is the first Longo rookie to make it to my collection. This card was hot in '08, and I would've given a ton to have had it in '06 and '07 when I lived in Montgomery, Alabama, because I could've got it signed by Longo at a Biscuits game. I have a lineup card and baseball signed by Evan, but no cards. There are some other cool cards of Longoria on this page, including a '09 Vintage parallel, '10 Cards Your Mom threw Out insert, and a sportflix-type insert from '11 Ticket To Stardom. Next to that one is an X-Fractor of Jeremy Hellickson. 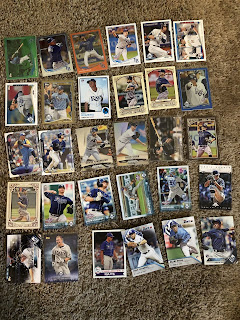 More Longoria cards, including a Green '13 parallel. The Price Orange Refractor is sweet, and it will look nice next to the Purple copy I have of the same card. The Escobar Opening Day is a Blue parallel. 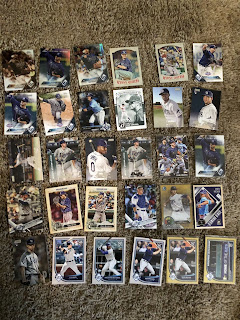 This page has a bunch of refractors to start out. I can almost start an Evan Longoria '16 Topps Chrome Rainbow with the sepia and fish-fractor. I also have a sepia refractor of Odorizzi, so I am close to having a good portion of his rainbow. One of my favorite cards from the box was also the Gold Refractor of Brent Honeywell from '18 Bowman Chrome. I love how he has the true screwball, and I really think he is going to do well. 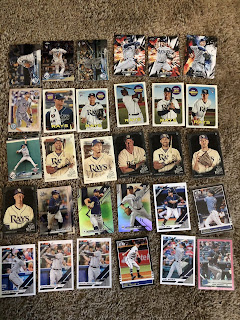 The Heritage cards get me closer to finishing the set. I know I have said that alot, but after doing nothing but looking up cards on TCDB, I think I have enough to finish a number of sets. The Allen & Ginter Black cards are my first ones from that set. 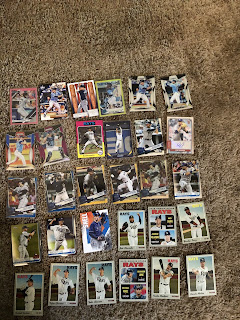 The Garcia Big League parallels give me the complete rainbow of that card, I believe, unless there are a few 1/1s. I know I have the base, Gold, Blue, and Rainbow foil copies of the card. More Heritage needs, including some cool rookie cards. I wish Topps did that with all of the rookies in new sets. 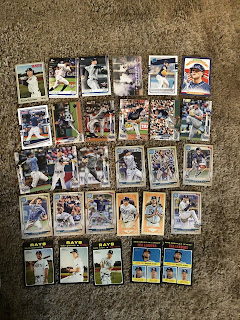 There are some new Gypsy Queen and Heritage cards which will help those sets out. I plan on putting one of the Morgan League Leaders in my Rays binder and putting the other one in my Astros binder under 'Verlander'. I lost all respect for Cole when he became a Yankee. 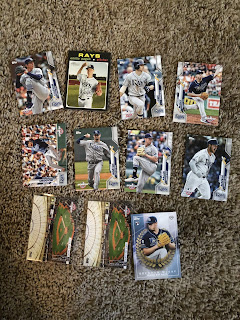 The last page is chock full of '20 Opening Day, which I believe is complete now. 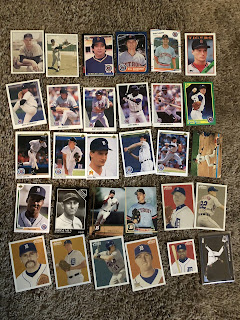 Kerry also sent me some Tigers. I got a number of needs from early '90's sets. I love the '94 Bowman Thompson and the '06 Bowman Heritage cards. I've seen a number of the rookies in the minors, and haven't heard of some of those guys in years. 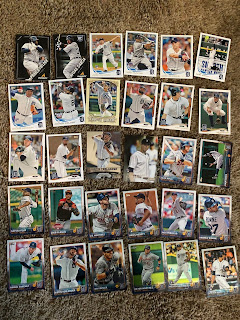 This page has a bunch of cards from some of the years where I really didn't buy many packs. I had just got married and money was tight, so I just didn't buy cards that much from around '12-'14. It's always nice getting new cards from that period to fill in the gaps. 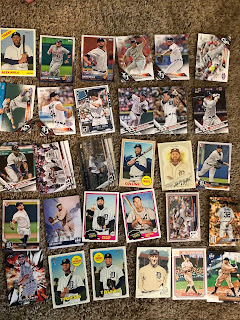 Kerry sent a ton of Heritage cards, and they make an appearance on this page. I think the Sam Crawford card at the end is my first card of him. Crawford makes another appearance, this time on a red parallel. I've really wanted some cards of new Tiger prospects, and Kerry didn't disappoint, hooking me up with a '20 Travis Demeritte, Tyler Alexander, and Jake Rogers. 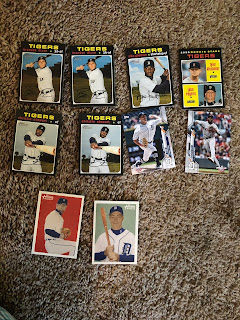 The last page has 2 guys for my Favorite Player binder, '06 Bowman Heritage cards of Nate Robertson and superutilityman Brandon Inge.

Thanks, Kerry, for the awesome package!! I look forward to putting all of these cards in binders and seeing how close I am to finishing some of these team sets.

I also recieved this '12 Bowman Chrome Refractor of James Shields this week. It was part of a Diamond Nine giveaway post that Kevin from The Diamond King did. 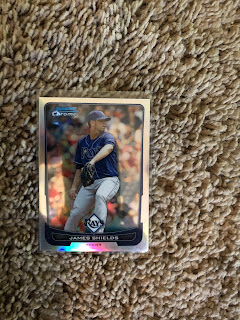 Thanks to Kevin and all of the rest of the bloggers who have done giveaways.

I am trying to update my wantlists, and the process is fun, but very slow. I have been going through my Rays binders and all of my loose Rays and have been checking them off of lists on TCDB, and adding the card numbers of the needed guys to my Rays Wantlist. I have finished the '96-'07 sets, and am in the midst of Bowman sets in 2008. I hope to get a number of sets done on my day off on Tuesday, and who knows, if I get a good jump, perhaps the Rays will be done by the end of the week. After the Rays are done, I'll do the same thing with my Tigers Wantlist, and finally, I will go through my Favorite Player binder, and just maker sure all of the pages for each player is up-to-date. This shouldn't be nearly as difficult as updating checklists. I hope this makes it easier for anyone who wants to trade with me.
Speaking of trading, I am in the midst of making a few trades. I hope to go through some of my binders on Tuesday as well and at least get a small stack going for each one I am working on.

In reference to a post I made around a week ago, it looks like MLB is going to start up again, maybe in July. 80 games, 3 divisions, DH in both leagues (YES!!!!!!!!!!!!!!!), and a 20-man taxi squad.
I don't like the idea of expanded playoffs, but perhaps this give some weaker teams that got hot a chance to get weeded out. Maybe there is another reason (besides more money) to do this. I get the reason for the 3 divisions staying in the same 'zones'. I think there are enough good and bad teams in each division for the cream to rise to the top. The DH in both leagues is great in my opinion. I have dreamed that my son will grow up in a world without having to watch pitchers swing and miss at 3 pitches.
What really worries me is the no minor leagues thing. Not only will it take away so many jobs, but it really jeopardizes the chance of some players to ever get to the Bigs. One such player is Brody Koerner, who I am related to through marriage. Brody has had a taste of AAA ball the past 2 seasons, pitching mostly in AAA last year. He got hit hard, though. I figured if he did well this year, that he could join the Yankees in September. Now with no minors, I don't think he will get a shot this year. I don't think he would be on the taxi squad, he is (presumably) at the end of his contract, and without getting a chance to pitch in 2020, who would sign him? He could be useful to a team like Detroit, Baltimore, or Florida, who won't be winning for another 3 years or so. It's just a bad situation for everyone in the minors. Hopefully someone smarter than I will come up with a better plan.
Thanks for checking out my latest post.
-Jeremy
Posted by Jeremya1um at 7:29 PM