I recently recieved 2 card packages, and I thought I would show them off, and also post what's been going on with my garden.

A few weeks ago, I reached out to Brad from Brad's Phillies Blog, and we got a trade going. I sent him some Phillies cards I had in my collection that I thought he would like, and he sent me back a nice assortment of Rays. The McGriff is from  the '99 Pacific Revolution set, and it looks amazing. The Shawn Riggans dual autograph from '07 Topps Co-Signers is the 2nd autographed card from Riggans I have from that set, and the '07 Turkey Red relic is my first Delmon Young relic. Same for the '08 UD Timeline Kazmir jersey. The Ticket to stardom cards got me 2 or 3 cards away from completing that set, and the '12 Bowmans got me close as well. I'll tell you, after working up updating my Rays Want List, all of these Bowman sets have me confused. In '02, Bowman released their Draft Picks & Prospects set, which wasn't really confusing, and if I recall correctly, they had a separate Chrome set for it and the regular Bowman set. Things started to get confusing in 2006, when each Bowman set had a regular set of 'established veteran players', then another set of 'prospects'. The Bowman Draft Picks & Prospects sets had another dual set kind of thing, with 'Draft Picks' and 'Prospects'. I don't recall when, but the original Bowman set started inserting Chrome cards in their packs, so you had a Bowman Chrome Prospects set in regular Bowman, and then I believe Bowman Chrome was issued separately so you had 2 different Bowman Chrome Prospects sets in 2 different sets, and it just got confusing to me. I think it's just down to the 'Bowman' and 'Bowman Draft Picks & Prospects' sets with the Chrome cards inserted instead of a separate Bowman Chrome set now, so I think it will be a little easier to figure out what is what from newer Bowman sets. With that being said, I am appreciative of getting some Bowman cards from 8 years ago from guys like Brad. 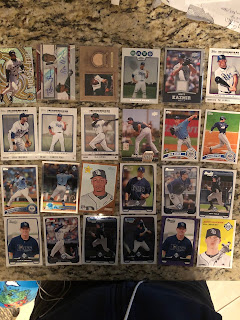 The next photo has some '12 Archives guys, some '12 Topps Chrome Refractors and X-Fractors, and some neat 2015 Topps Toys R Us Purple cards. The last 4 cards are guys from my Favorite Player Collection. The McCracken is another one from '99 Pacific Revolution, and the Zobrists are from '12 Archives, '12 Chrome, and '13 Topps Wal-Mart Blue. 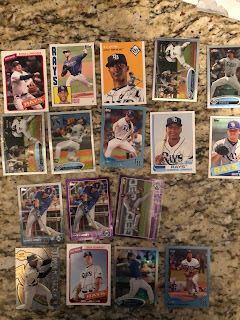 The highlight of the package, for me, was this 2004 Elite Extra Edition Aspirations Die-Cut autograph of Joey Gathright. Gathright is in my Favorite Player binder because he had some torrid speed. I was going to Rays games when he was in the minors, and I remember fans and analysts talking about him and how he was going to be even faster than Carl Crawford. He didn't get too much of a shot with the Rays, but ended up playing for a few years in the Majors. 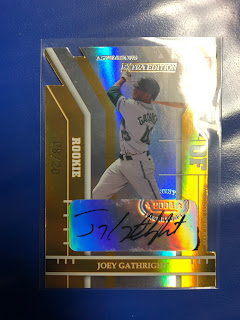 Thanks to Brad for all of the cool cards.

The same day I got Brad's package, I got a PWE in the mail from Greg of Night Owl Cards. Greg sent me a '79 Topps Rusty Staub, 3 Topps Holiday Rays, a Stadium Club Matt Duffy, a Gallery Jose De Leon, 3 guys from this year's Opening Day, a sweet Blue parallel from the same set, and a '93 Topps Brook Jacoby sunset card. I hate to admit it, but ever since I saw the post Greg did that I hoped he would send the Meadows Blue Opening Day to me in a trade. 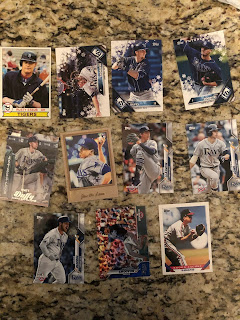 Thanks, Greg, for the nice surprise PWE. I'll get a stack of cards going for you soon.

In addition to all of the trading, I have been doing some work on my aforementioned Want Lists. I am almost done with the Rays, just need to update the '18, '19, and '20 sets. I hope to get it done by Tuesday or Wednesday of this week. Next up will be my Tigers Want List, and then the Player Collection pages. The Tigers ones will probably take a month or so, and the favorite players shouldn't be that long since I'm just adding a few new cards to the list of most players.

I've been doing a little bit of tending to my flower boxes outside. Basically I have 2 6x6 boxes, one in the front yard, and one in the back. The one in the front doesn't have that much space due to the tree stump that I built it around, but I'm making the most of it. The front also has a little area by our front sidewalk. That has a few things already there when we moved in the house, and I added an aloe plant about 3 years ago, a mini rose plant around the same time, and 2 new plants a few weeks ago, a pineapple top, and a few orchid seeds that a coworker gave me. So far, the orchids haven't came up, and I think it's too early to tell with the pineapple.
Switching to the back yard, the 6x6 box has a few things, 3 pineapples that are around 1 1/2 years old, a milkweed bush that is a year old, and a few random seeds that I've planted over the last 2 months that I'm still kind of waiting on. I have 4 gladiola bulbs that I planted which are doing very well, and I'm sure I'll see flowers on. I planted a few old potatoes that had sprouted, and I'm going to wait until the branches are good and dead before I dig them up. If they are anything like the last time I've done potatoes, I'm not expecting much.  I believe there was a wildflower mix and some sunflowers. There are a few things growing which may or may not be weeds, so I'm just going to wait and see if they flower before pulling them out. There are 1 or 2 sunflowers that might blossom, so that is good.

On to the front yard box, I have a milkweed bush doing very well. It was growing seed pods all through the winter, and some new ones popped up on it about a week ago. I planted 2 gladiola bulbs, which have sprouted up and I think they will bloom. Last year, I planted a wildflower mix that must've had a bunch of zinnias it, because they just took over the box. It looked nice, but then the plants got a white fungus on them, and basically forced me to get rid of all of them. Some of them must've dropped seeds before I could yank them out, because I see 1 or 2 zinnias in the box now. There are a few snapdragons that I planted, and they are doing well and blossoming. Along with the pineapple top and orchid seeds that I planted by the front walkway, I also planted them in the box. The orchid seeds have had one pop up. Here it is. 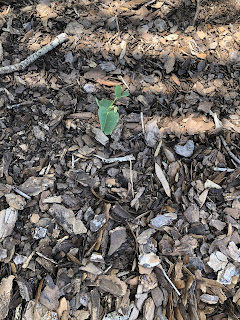 I also planted a few sunflowers, and one is doing really well, and I'm going to see a flower any day. You can kind of see the snapdragons to the left of it, and right by one of the bigger leaves on the right is a morning glory. I have a few of those growing, and I could get a ton of seeds from them if I want. 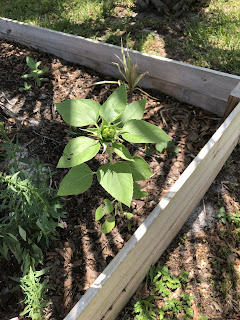 If anyone is into planting stuff, maybe I can send you some seeds I harvested during a future trade. I have a ton of milkweed seeds, and I'm sure I can get a number of ones from the sunflowers and morning glory's. Not sure what will come from the gladiolas, snapdragons, and orchids, but I'm holding out hope that I will get a few seeds from each.