Trade with Nomo’s Sushi Platter and another song

First off, thanks for all of the kind comments on my last post. I have never pictured myself as someone with insignt, more as someone who to learn what not to do from, so that was very encouraging to hear people say that. More on the previous post later.

About 2 months ago, I emailed Michael from Nomo's Sushi Platter after seeing a blogger post about trading with him, and we got a trade started. I sent some cards of Hideo Nomo, Andre Ethier, Mike Piazza, Raul Mondesi, and Matt Kemp, and Micheal sent back a bunch of Tigers and Rays. 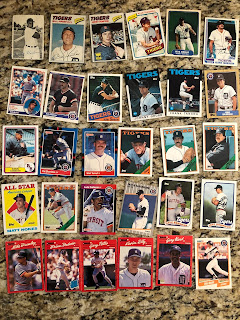 The first pic starts off with a deckle edge Willie Horton and a sunset card of Bill Freehan. Many of the cards helped me get closer to finishing some Tigers sets off. I could've sworn I had the '88 Topps Nokes All-Star, but must've had it autographed and sold it, because it was listed as a need. 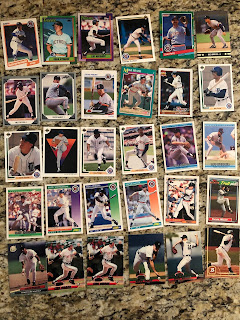 My favorite cards from this page are probably the '92 Topps ones, since I've got both of those autographed and needed new copies for my binders, and the 1993 Stadium Club cards, as the photos for many of them were taken at Joker Marchant Stadium, which I have been to hundreds of times. 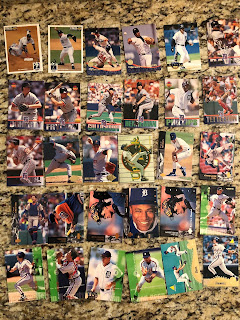 This page has a number of sets that I missed out on in the '90's, like '94 Triple Play and '95 Fleer. The '94 Upper Deck Matt Brunson brings back memories, as I remember pulling his '94 Bowman card that year, and I had hoped to get it signed. I must've missed him playing in Lakeland in the minors, because I probably went to 1 game in '94 and he wasn't there. I didn't stay much after Spring Training games at that point either, so I probably missed getting him there before he retired. 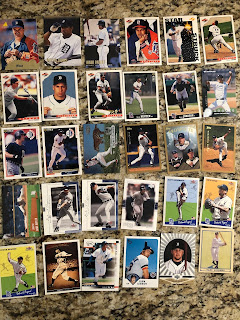 This page features a number of cards which I had signed at one point, but ended up selling, including the '98 Collector's Choice Catalanotto, the 99 Topps Robert Fick and Justin Thompson, and the '02 Fleer Matt Anderson. 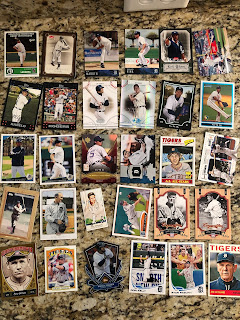 Some of my favorites on this page include the '02 Upper Deck Victory Wil Ledesma, the '07 Topps Mike Rabelo (one of 2 Tigers cards Mike got in that set), the Al Kaline '08 Donruss Thread parallel, the Ultimate Collection Fu Te Ni (the first card of Ultimate Collection I have ever owned), and the Cut to the Chase die-cut Fielder insert. 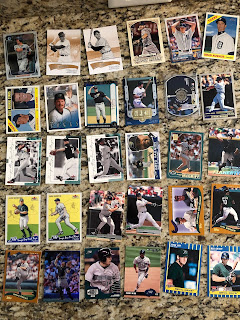 This page finished off the Tigers and gets to the Rays portion. Does anyone remember when Upper Deck PowerDeck came out? I remember a few people thinking that CD's were the future of baseball cards. I think the set only lasted 2 years, and here we are now with online on-demand sets that Topps can just print out enough of to cover the orders, and all of the high-end stuff that doesn't do team players any favors, and did I mention the hundreds of parallels to everything? I think the CD's would've been a better way to go, don't you?
Most of the Rays were new-to-me. I have never been a Fleer guy, so just about any time someone sends me Fleer, I need it. Nothing bad about Fleer, I've just always been a Topps guy, and I just like their designs better. 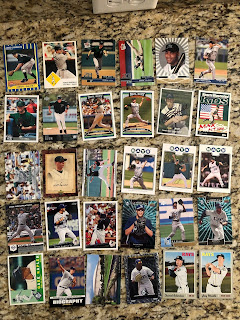 This one finished off the Rays, with just about all cards being ones that I needed. The Total Rob Bell brought back some good memories. I saw Rob at a Rays game one year before a game. I had the Silver version of that card, and Rob came over to sign, and he signed his '98 Bowman card for me, and I asked him if he had the silver Total card. He said no, so I gave it to him, and he proceeded to put it in his back pocket, and then sat down in the dugout. It made me cringe to see him sit on the card and probably bend it. I love the Tropicana Field photo, as I can imagine myself walking around the park. There is a little river that runs along about half of the park. I usually enter the park around the CF gate, and the river is just to the left of that. The parking lot is along the LF side of the park, with a railroad track running along the side of it. I hope we can get back to a game in 2021. 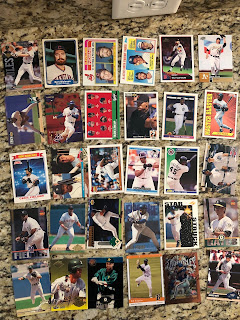 Here are the cards for my Favorite Player Collection. I love the Upper Deck Vintage card of Carl Everett. I remember a guy on an autograph messageboard had got the Tigers version of that card signed by everyone except for Rich Becker (who was a pretty decent signer ttm, at least for me), and he was freaking out about sending to Becker, wanting to send him a certified letter first explaining that he would be sending the card to him to finish, and contemplating getting insurance and the whole 9 yards. I understand being worried, but it kind of seemed like he was going overboard. Never found out if he sent it or not. I love the '91 Stadium Club Fielder/Canseco. The Didi is a minor league issue. 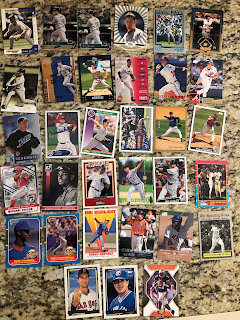 The Huff's are either new ones or ones that will fill in holes in my Rays binders. I appreciate the time Michael took to go through my Want List and how he hit many areas of my collection. The Mark Lowe and Brandon Morrow cards are both autographed. I'm stoked about the Lowe, because he only has 1 certified autograph card, and the lone copy on COMC is overpriced in my opinion. Not many people I've traded with have taken the time to send highlight cards, but Michael fond a few to add, and I'm excited to add them to my Highlights binder. He also found some Topps Gold cards for that project and a card of Jason Campbell, who was Auburn's QB shortly before I lived in Montgomery, Alabama and really started following them.
Thanks to Michael for the awesome trade.

So the last post that I made featured a video of an original song that I wrote, along with the lyrics and a chord sheet. I still am not sure if the video worked for everyone, so I tried going the YouTube route. I had made a video on how I make customs and put it on YouTube, so I took the 2 song videos I made and posted them to YouTube, so if you can't view them on my blog, you can perhaps view them there.

The first song was called 'Plan B', and here are the videos and lyrics/chord sheet. 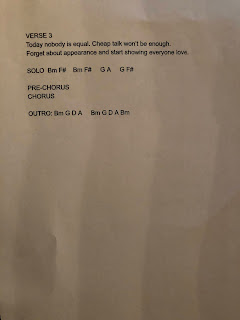 Here is the link to the YouTube video if it doesn't work.


The other song I recorded was an original song I wrote called "I am your Peace". In around 2002, I had written a bunch of what I now think are just crappy songs. I didn't really know much about chord progressions and music theory back then, but I did write the majority of this song back then. Sometime during that period, I was talking with my friend Jason, who is an excellent piano player and drummer. I told him (naively) that I thought I had run out of topics to write songs about. He asked me if I had ever written one about peace. I thought about it, and then had a topic for my next song. Jason and I were in a band with some people in our youth group. We mostly just did the worship songs for the services, but we got together when we could, and had tried to perform some original songs. Our friend Joe, who played guitar and sang lead vocals in the band had written some music for a song on guitar with a D, A/C#, Bm, G main progression, and a Em, G, D, A secondary progression. Nothing really came of Joe's song, but while playing the progressions a few times with him, I came up with a sweet piano part to it. I never told Joe, but I took the piano riff I came up with to the progression he had, and used it in 'I am your Peace'. While living in Montgomery, Alabama, I came up with the main melody of the solo part on a guitar, actually. I have performed the song a few times over the years, once in 2004 or so at a youth worship service at our church, once while getting to open for a band called Thalon in 2007, once at a talent show for our church's college group, and a few times at a church that a co-worker went to for their Friday night music service in 2010.
The song lyrically is about all of the struggles we go through and how the person saying 'I am you peace' in the song will always be there. That person can be different things to different people, whether it be God, a significant other/spouse, a good friend, or a close relative. I hope, like in the last song I posted, that it is a message that can be held on to during these crazy times in the world.

Here is (hopefully) the video of that one, as well as the Lyrics/chorcds. 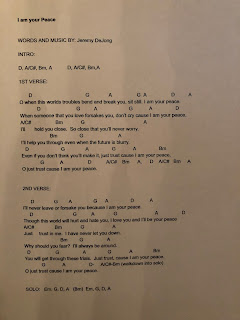 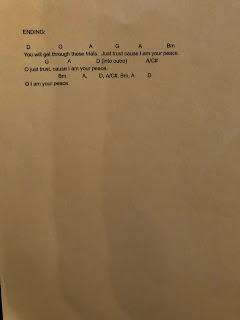 Here is a link to the YouTube video if the one posted here doesn't work.

I wanted to mention that I have a few more 'Christian' songs that I have written that I could record and post if anyone is interested. If nobody is, I don't really see the point in wasting anyone's time, so if I get enough interest, I'll do it. If you would enjoy hearing any of these other songs, please comment, and if I could also get a few people to comment if these videos are actually working. I'm still not sure if the one I posted previously ever did.

I am still working on the Sunset Card post, and have the 1951 to 1978 Topps sets finished. There is a lot of research involved (identifying who to list for each year, seeing if Topps gave them a true sunset card and if so, identifying the card number, and finally, if they don't have a true sunset card, seeing if a custom card has been made of them (thanks to When Topps had Balls, 90% of guys in the '70's do), but I think all of the research will be worth it in the end, and it could end up being a valuable list for collectors.
Thanks for checking out my latest post.
-Jeremy
Posted by Jeremya1um at 8:27 AM